Maths Python to Snap! block simple solution hopefully....
My knowledge of Python is limited. It all comes down to this last line on the Python script. In its simplest form just just add this variable (t) to that variable (inc) and add one to that (t) and then repeat in a sequential loop. But this last line of Python code has me stumped on my conversion, nothing works for me. t+=inc Any help appreciated on this challenge.
Thanks,

(The python script I am trying to convert is below)

Hi bh, I did try that but it did not work for me. You can have a look here and see what you think. Your suggestions welcome, this is as far as I got... its nearly there but not quite as i hoped.

In Python, you have to use the * operator to multiply. Having "2" and "pi" next to each other will result in a "SyntaxError: invalid syntax".

Good point. I had not noticed from my example Python script that my ‘cut-and-paste’ had removed all the asterisks ‘*’ on this forum. I am trying again here: I think it was the conversion from radians to degrees that originally made me confused. And you are right to point that out, thanks.

Hopefully this is correct with the asterisks:

Fiddle. Its removed the asterisks (again). Oh well!
So - If anyone wants to play with it its also here: 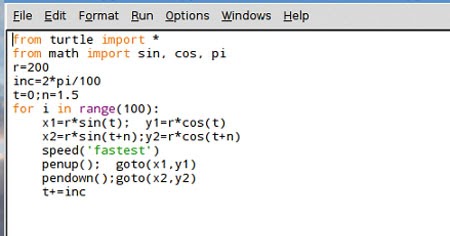 Polygon Circles on Python-There’s lots of Mathematics used here along with some intricate coordinate manipulation with the Turtle module.

Try putting 3 backticks (```) before and after your code to format it as code. If you need to put asterisks in non-code, you can try prefixing each with a backslash (\).

if you want to draw a circle, try something like

you can also use