What do you think of this project?
If you want more PYOP, go to the official PYOP collection!

it reminds me a Hulk.

Oh, @nieznajomyh, what a coincidence! The character featured in this PYOP is none other than Frank Freakbar. Here's how he looks: 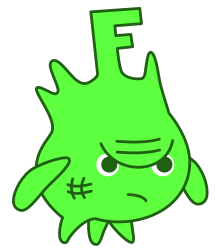 In the PYOPs, he is best known for toilet humor and harassing/kidnapping Yoshi (in PYOP: Yoshi goes to israel), Touhou Project characters and recently, Donkey Kong characters for no reason at all.

He first appeared in PYOP: Frank Freakbars First Meeting, where he goes to a shrine to meet Reimu Hakurei and Marisa Kirisame (in their PC-98 designs).

He then appeared at the end of PYOP: Yoshi goes to israel to threaten Yoshi by telling him that Frank Freakbar will pee in Yoshi's mouth.