So, if you're at the top of a thread, you see that beautiful wide "Snap!Forum" logo in the corner. But once you scroll down, the forum uses up a lot of the space to show the thread title, and you only get a tiny Alonzo in the corner to get back to the forum home.

I always find that Alonzo confusing. Where does it get me? The snap front page? So I propose to replace it with this:

Tada! That's "F" for "Forum," clarifying what it does. It would be okay with me if someone more competent redid the artwork.

What do y'all think? @cycomachead...

P.S. His name is Frank Foobar, named after this guy: 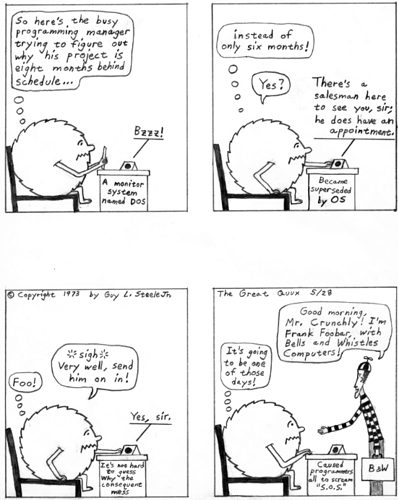 Why are there so many Gobo people?
Gobo:

I personally think that is unnecessary, because it isn't a bug or anything like that, but if you want it that way, you decide.

it's not a bug (how would it be a bug?), and I think it might be a good replacement.

something like this is super simple and very easy to change. This would take about a minute or two to change. All they have to do is replace the Alonzo picture with Frank Foobar (on the forum, not the actual image).

I vote for Frank Foobar.
Oh, and thanks for sharing the link to

I am fine with Alonzo being there. He looks cute and I am used to seeing him there. Also, your proposed mascot looks quite weird to me actually.

Also, your proposed mascot looks quite weird to me actually.

Okay, maybe it's a bad idea.

I suppose, but "Alonzo" is a sufficiently rare name so that everyone who hears it, and who knows about lambda calculus, will recognize the reference. Whereas "Frank" could be after anyone, and only people who grew up at the MIT AI Lab would have any chance of guessing right.

That is only my personal opinion, of course!

hahaha i made bald gobo

Okay, since everyone thought my proposal was too weird, what about this one:

that one looks a little worse than the other one (I actually liked your first one, but I was too lazy to say it before)

gonna be honest with what I said when I saw that: