Problems with sound on large projects

I have a HUGE project (40MB). and after some minutes, the sound kind of acted strange.

It keeps stuttering every few steps, and it keeps getting intense until it just goes mute...

Is there a way to fix this? I've been saving my projects over and over to my PC and refreshing Snap to fix this problem, and I've grown tired of it.

what do you mean by getting intense? can you record the audio (with a program like audacity)?

why is the project so large?

I can't record right now since I don't have much space to record...

The project was so large because of the amount of media I put into it. Also, for some reason, the audio from Snap! It works fine while not focused (only when a tab is not busy uploading or downloading).

Here is the project that cost 40MB of disk space: 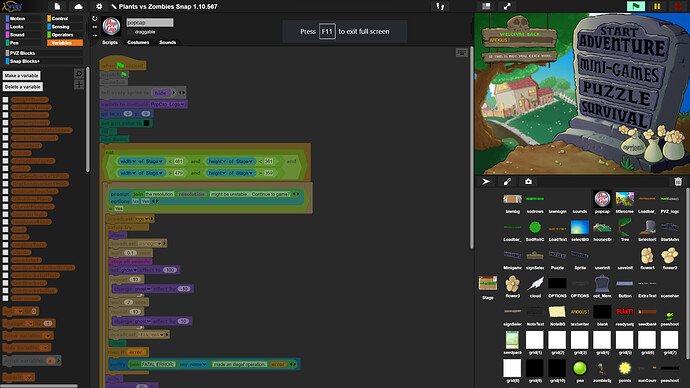 first of all, pretty impressive

if the audio issues are only when putting more load on the system, it's probably an issue of system strain, and that would be up to the os audio system

before that, is there anything you can see in a task manager when you load the project or get audio issues? (very high cpu, high memory, etc)

The last time I remembered was that it was taking a lot of memory usage (around 70-90), and that was the only tab and app I had open...

I have a 5 year old laptop with a linux distro installed on it (6GB RAM, 500GB HDD, and some ISOs that i downloaded for some reason)

Well, it kind of improved, just around 30-40% of Memory Space (with the only tab and app open) but still the sound issue persists...

image790×40 3.32 KB
Everything is normal here with no abnormalities.

Chrome (and 54 other extensions) is taking a lot of system resources but still isn't affecting any processes.

image790×34 3.34 KB
All other processes and other tabs or extensions from Chrome were fine, rendering sound and video. Only Snap was having stuttering issues.

I'm guessing Snap's sound renderer has no space left in the virtual space from the %TEMP% folder.
I have 279GB of free space right now. Do I have to switch to another browser for this? Like Firefox? Opera GX? I might switch to these browsers I've typed in to see the performance.

I'm guessing Snap's sound renderer has no space left in the virtual space from the %TEMP% folder.

opera gx, brave, edge, vivaldi are still all chromium, pretty much the only browsers that are actually different are firefox/librewolf (gecko) and safari/epiphany (webkit)

also, if you're trying to measure the temp folder, you should be going in that folder and looking at the files there, not whatever you're doing in task manager

I was about to look on the Temp folder but ok

No, I give up. I really need to fix this "crispy" sound problem. It's been bothering me for a month...
Also, I encountered another problem with broadcasts not working properly...

The problem appears between 5 to 15 minutes and becomes more common when it performs large actions. While it does, the sound problem starts around 2 to 10 minutes into editing.

The broadcasting problem starts around 20 to 40 minutes of editing time, and no, the Snap! The timer isn't the problem.

The problem doesn't occur on other sounds like Clicking effects, sounds from the Sounds tab, or other Websites. Only the project has this specific problem...

There's a bug on sounds where playing sounds create DOM nodes without deleting them. This may cause unexpected behaviors after around 600-800 times you play the sound, and go mute after a sound has played exactly 1,000 times (1,000 DOM nodes).

This has been discussed on this topic, saying that this will create DOM nodes that are never deleted, and you may hear corrupted audio after you play a sound 600-800 times. And too many DOM nodes can crash Snap!

This is why you may hear strange audio.

So when there are too many entities like this playing sounds:

How do I fix the DOM node problem?