Problems with copying Costumes from another sprite

I was trying to make an OS Simulator that copies Data to another sprite to execute other tasks...

But there was a problem:
How do i copy a costume from another sprite to the current sprite using a script?

I tried using the "switch costume" block with a reporter reporting the other sprites' costume, and it wouldn't work! i also tried the cut from/paste on blocks and it also did nothing...

Maybe it could be a problem from my other laptop, doesn't work on Reported Objects, or i'm just stupid. whatever it is... please let me know!

For anyone who remembers this, at least thank y'all for trying to help me.)

I tried using the "switch costume" block with a reporter reporting the other sprites' costume, and it wouldn't work!

Should work. Please show us your code.

You can use this script

i only got the image
edit: o.O 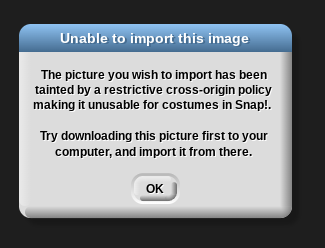 @egolay_atmanbay, how did you manage to get that?

Save as and import

Just get a script pic of a script.

... with this <> at the bottom left corner of the costume preview, showing that a script is inside this costume. To get the script, right-click the costume, and click get blocks.

i made it in the snap bitmap editor and exported it

I guess snap does remember what code was in the costume, so that makes sense.

ok, thats what i was talking about