Is it possible to prevent accidentally/dropping a reporter/predicate into a whole script? 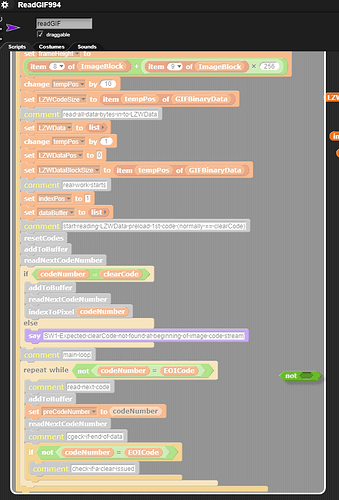 Asking for a friend who seems prone to this

It's maybe time for a new mouse

yeah, I've had experiences with that too. I wish I could only drop it into the script when I hover over the block, not the area around it.

Maybe have the reporter only be able to be dropped onto the input if you drop it at the start/end?

At least you can undrop...

I agree that it would be better if hovering over background didn't allow a drop into a script even if within the script's bounding box. @jens, on a scale from -10 to 10, how likely is this feature to being implemented? (-10 = I hate the idea.)

-10 for custom blocks, because recursion.

Oh! You mean the reporter is replacing the C-shaped slot. I didn't get that.

Yeah, we need that capability, but I also sympathize with the suggestion, because I've had that problem too, being unable to let go of a reporter without it bumping a big long script.

Suggestion 1: You can only drop a reporter into an empty C-slot. (So you'd first pull out the script that's in there, then drag the reporter in.)

Suggestion 2: You have to shift-drop it.

Naw. Being able to replace C-shaped slots in custom blocks with reporters is one of those features that emphasize the idea of procedure as data, i.e. that a reporter can report a command script. Those are the grand ideas Snap! lives for, and demoting them behind secret gestures just for the convenience of writing spaghetti code is not going to happen with me.

So, like, if a script has IF <big long conditional> so it's wide, that makes it spaghetti code?

I'm with you about the grand idea, though.