Issue:
When a long script is called to run, other moving sprites pause for a visually noticeable period of time.

I think this is caused by the IDE adding the glow around a running script. 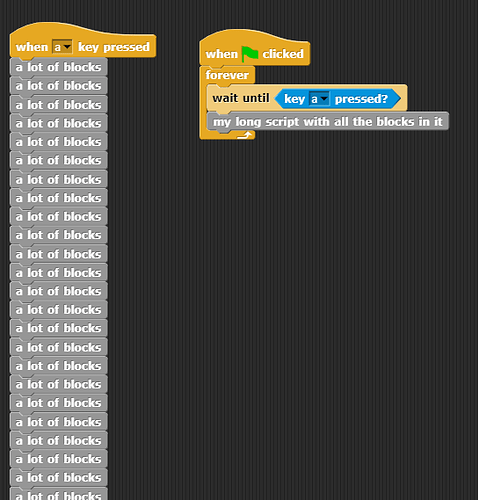 Recently, I added the bomber going across the screen after a few seconds, and the glitch came back

Of course, it might just be on my machine

If not and its replicable, can the "glow" effect be made more co-operative to other running processes or as a last resort - can it be made a project setting?

I like your custom block solution! If you have a script that's soooo long that just highlighting it induces a noticeable pause that's a sure indicator to create a custom block

(Naw, no additional settings or "modes")

I've also experienced these lags and always tought it was due to keyboard events detection (as you did) and haven't dig into it. Thank you for the custom block solution. 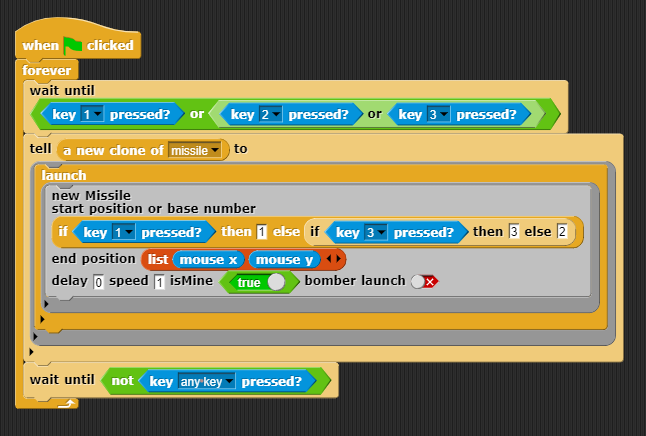 Not sure I understood what the problem is here. What's wrong with forever loop and key repeat event?

Will you share the project here on this forum?

Fantastic recreation, @cymplecy! Keep us posted on the progress. I'd love to see it when it's finished! We didn't have the BBC micro where I'm from, but I did have an MSX2 computer, and that's where I began to program. It also ran a BASIC interpreter and no OS, and I also had a similar game to Missile Command (I believe it was called Missile Attack). I didn't know much about programming back then (I think I was 8 when that computer landed on our home) so I've been recently having a lot of fun …

The same problem for rather a short script but many iterations

or even without screen interaction 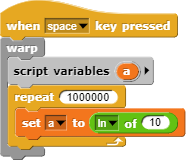 With non-preemeptive multithreading of Snap!, other scripts are blocked by a long-running one.