Overlap is a bad thing (smile)

Hi, why if i drop some stuff under the hat block it was overlap? 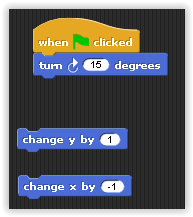 It will be this after (no overlap): 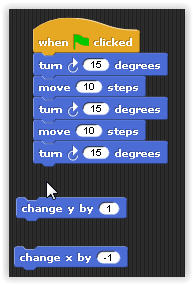 sorry for my bad english...

It doesn't matter; the change x block isn't connected to the imported script, and you can pull it out to wherever you want.

That's not the point @bh, why i have to move "manually" these block at the bottom...

an what if i have 10 script under the first, i have to move the others 9 after i edit the first one...

this is just an idea to improve the interface...

(i know the function clean up)

Yeah, I know, it could be better. When I'm working on the BJC solutions I often have to move dozens of tiny scripts and comments down to fit something in between. Maybe someday.

do you know that you can arrange the scripts vertically so they don't overlap by choosing "clean up" in the script pane's context menu? 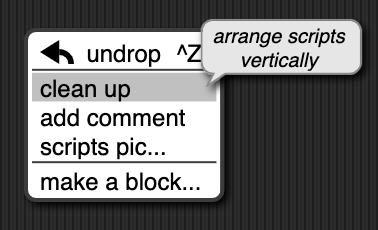 this should help with having to move many scripts, because it automatically does that for you. Provided they're all arranged in a single column (as you would have to do in a textual programming language anyway).

Provided they're all arranged in a single column

yeah, in a single column... (and we have to do it frequently)

I often look at other people's scripts and notice that a lot of people don't use a vertical layout for programming.

Sometimes we want to put a script or part of a script temporarily aside (as a backup for example), sometimes some people prefer to put scripts side by side for reasons that are up to them (that's their choice, the interface no. does not have to impose a provision for them) ...

I agree, I don't use like using the "clean up" option in Scratch 3.0 and Snap!, because I don't like all my scripts being in a single column. The reason being is that scripts usually expand downwards. If they were all arranged vertically, then the script might overlap other scripts. So I would rather clean up the scripting area manually.

I personally think that this is a bad idea. I really hate it when I'm coding in scratch, whenever I overlap 2 scripts, scratch moves one script to the bottom right of the other script. It really gets annoying. I'd much rather use clean up or manually do it. 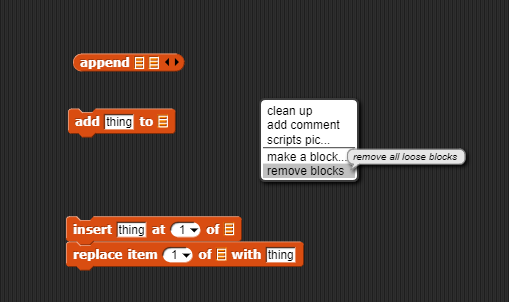