"on edge" and "bounce" blocks

Here are the blocks 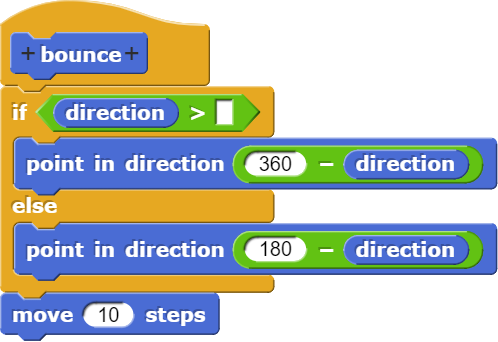 so you can create the block

as well other combinations.

Here is a variation of the "on edge" block

I like the idea of reimplementing primitives to show how they work!

Do some experiments. For example, put the sprite near the top of the stage and set its direction to 350, and see what your BOUNCE does.

Ok, could you show me the script pic of your new and improved bounce block?

I hadn't made one, but here one is. It's a little complicated because of the case in which the sprite hits an exact corner of the stage. 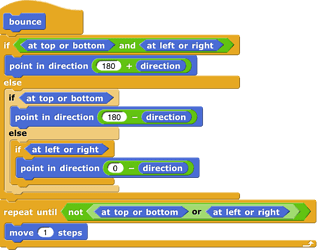 Nice! You might want to generalize it for variable stage dimensions...

Also, the actual if on edge, bounce block also works if the sprite has since turned.

Some minor details though... (sorry for the nitpicking ;))

But Brian is right. Cool idea to reimplement some of the primitives to see how they work. It's not that easy sometimes

Yes, reimplement primitives is cool. And not only to see its way... also to find new ways and also to change behaviors (do what you want).

Really, "on edge" is just

No sizes, no calculations...

Note: If you change "my rotation x/y", current "if on edge, bounce" is not running ok. But "touching" sensors are still fine!
Maybe it is laggier... but I like it!

How does the actual if on edge, bounce block work then?

Oh, it works mostly the same, but instead of checking the numeric position of the sprite it checks "touching edge" which checks whether any part of the sprite is on an edge. You can use

(right, top, bottom) to compute the edges of the sprite if you want to simulate it. (Computing whether or not this sprite is touching another sprite, which is irregularly shaped, is much more complicated.)