Not leaving traces with the mouse down

I have a silly little starter exercise to warm up my class, where they draw with the mouse. The simple form of the script we develop is this:

In version 6.2 (current when I last taught my class), this worked fine, but now (7.1.4) it no longer works. The sprite will follow the mouse just fine, but I only get occasional little dots and spurts of lines. If I change the 'got to' block to go to a 'random position', the sprite dashes all over and will draw when the mouse button is down and stop when it is up, as expected.

If I switch the logic and put the pen down initially and just change the pen color based on mouse state, it draws lines just fine until I depress the mouse button.

Sprite is shown? If so it detects as click on sprite . Please try hide sprite or move aside sprite in paint editor how there: 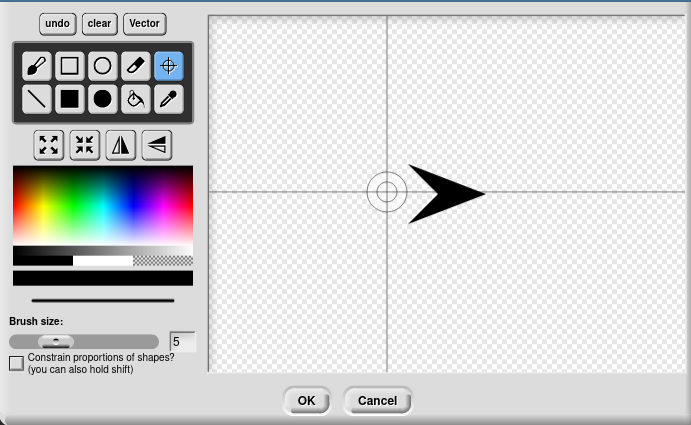 or just uncheck this box

you can keep the sprite shown, while not having to edit the costume. It's also a much easier option.

just wanted to comment on your code, it might be better to make the sprite go to mouse-pointer before setting the pen down. I'm saying this because if you only made the sprite go to the mouse when you click, it'll draw a line from where it used to be, to it's new location, but if you made it move before pen down, it won't draw that line. I know that's not an issue with your current script, but it might be better to teach the students to move the sprite before setting the pen down.

The problem, I think, is in the color picker. If you try for blue, you get black, for some reason. Or at least that's what it does for me. Jens can't reproduce the problem.

Now I feel a little foolish. Of course the problem is that I'm dragging the sprite around rather than letting it move! I even had a note to that effect on the assignment I wrote -- I just hadn't read it because I "knew" what I was doing... Sorry to spam the bugs list with that. Thanks for quickly pointing that out.