How to join the Hyposyn Team! Collaborations

can i take a spot as competitor

i'm making my own snap os to test out ui design and the abilities of snap, and i'd prefer it (even though the licenses allow it) for us to not just be taking code from eachother because that would get pretty boring

i wanna see some real innovation, comparisons, different implementations, other things for cross compatibility, all that good stuff

EDITS (i also changed the title):
since everyone seems to be confused
i'm NOT asking people to make more OSes (i don't care whether you do or don't)
i'm asking that people making the OSes don't just take code around because then it's just stealing code and the best os isn't from the person that had the best ideas or most work, which is pretty boring

if you want to make a competing os, you will be competing when a project is shared without copied code, there's no need to ask, just do.

Can I submit an OS even though I started working on it already (it's not released yet)?

I'll add more opcodes into it

NOOOO ITS ARCHTECHURE RESTRICTED IT TO 2 OPCODES! 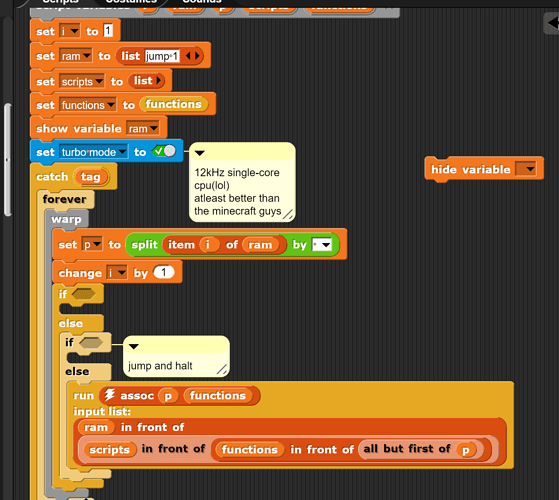 i'm not saying anything about submitting, i'm just asking that things don't get merged and stolen everywhere into one boring everything os

anyways can you explain why you're posting it on this topic? it doesn't seem related in any way
i'm not asking random people to make more stuff i'm really just asking those two if we can not steal from eachother so more interesting stuff happens

i think everyone is missing the point here, i'll edit the original post

anyways can you explain why you're posting it on this topic? it doesn't seem related in any way

An assembler
It's processing shell script

ok yes but i am still "competing"

oh okay
can i revert the project?i missed the point and now want to make a cpu at circuit lab
anyways im too fond of cmd shells and wont have any gui elements aside the ask at all

you will be competing when a project is shared without copied code, there's no need to ask