Do you mean primitive C-slots? Custom ones already allow it.

Yes, and the setting would enable or disable that for both primitive and custom blocks.

I see. Why would you ever want it off? I mean, if you don't want a reporter in there, don't put one there!

It can get annoying, working with custom C-slots and trying to drag a reporter in without replacing the entire script.

I guess so, but people accidentally drag things into slots in many contexts. That's why we have Undo. There's nothing special about it being a C-shaped slot.

If it makes you feel any better, it took me about nine years from when I first saw the MIT Press logo 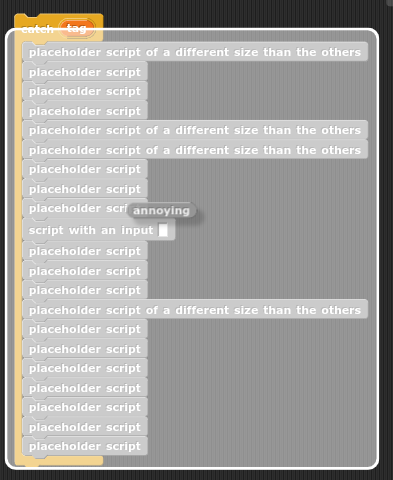 Yes, sure, but (1) that's what UNDO is for, and (2) it'd be no more annoying for primitive C-shaped blocks than for custom ones.

If it turned out to be a frequent problem, we could (for both primitive and custom blocks) allow dropping a reporter only into an empty C-slot.

we could (for both primitive and custom blocks) allow dropping a reporter only into an empty C-slot.

that's what UNDO is for

that's what UNDO is for

Undo doesn't work in custom blocks, which is like 90% of my projects, and even when it does work , its very buggy. please add Scratch style undo which just puts things as they were, whether that's re-creating blocks of script or custom blocks deleted by accident, and the input is as it used to be rather than reset to the default.

and the input is as it used to be rather than reset to the default.

Yeah I know, but that's way harder -- you have to remember the before state for any UI action, which fills up memory and slows down the actions. Although I guess slowing down may not matter because UI actions are limited to human being speed anyway. Anyway, it's on the someday list.

I'll run it by the management...