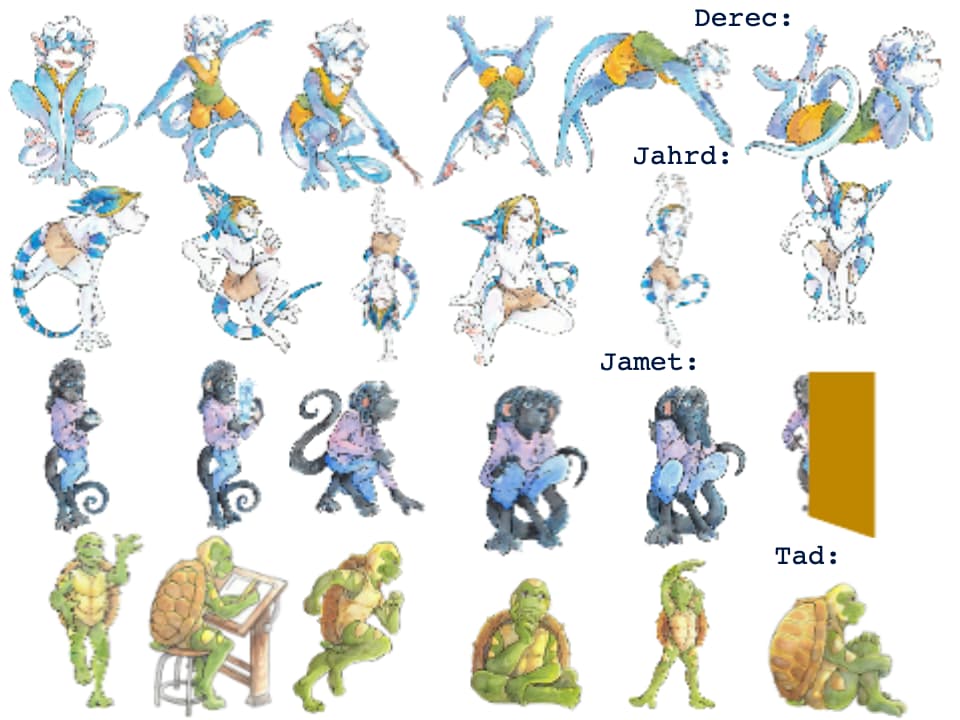 Stage960×720 71.2 KB
Most of our costume library is taken from Scratch (with permission, of course; they're freely licensed). (Alonzo is a special case; Gobo is not freely licensed, but we have special permission for our modified version.) We've been thinking for a while now that we should have some costumes of our own, and here's the first batch. In order to fit them all on the stage, they're at 25% size in this picture, so you can use them at much higher resolution than it seems here.

These beautiful watercolors were painted for us by Meghan Taylor, the writer and artist of the webcomic Prophecy of the Circle. Derec, Jahrd, and Jamet are characters from that webcomic, and they are licensed to us only for use in Snap! projects. The even more beautiful full-size originals are at https://people.eecs.berkeley.edu/~bh/Meghan-big if you'd like to see them. Tad the turtle isn't one of her characters, so I guess you can use those pictures however you like. The one in which he's drawing a square is, of course, a reference to Logo, which is sort of the Snap! of my youth. :~)

I should explain a little about Jamet. Besides being a cute and engaging young person, like the others, he's a spy, from the mysterious city to the south, which we haven't visited yet in the story. They have much higher technology than the other tikedi settlements (that's what these people are called, as opposed to the tekk, who seem to be dragons). This is why in his sixth picture, "jamet f," he's peering from behind a wall. The wall is a separate costume, so you can assign it to a separate sprite and have Jamet come out to the front of the wall if the coast is clear. (Or, of course, use your own wall.) In the first two pictures, a and b, you can see a piece of the mysterious Harangin technology in action.

Coming next: Derec's twin sister Sarron. Maybe not before v8.0, though.

It's a great webcomic, interesting as well as beautiful. Go read it! 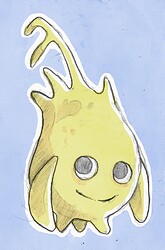 So there is a reason for the new costumes. Interesting!

Yeah. The author and artist of Kiwi Blitz just announced that she's taking commission orders, but I think she's thinking of two or three of them, not the 24 that I want. (Four main good guy characters in the comic.) So I'm not holding my breath.

... this is amazing! Does Meghan have more art like this?

Oh yes! Check out her Patreon or her DeviantArt. Or read the comic!

Do they have transparent backgrounds? The link with the full size images seem to not have the background removed.

That's right. I transparentized the backgrounds in Photoshop for the actual costumes. What's in that folder of full-size pictures is scans of actual watercolors on paper!

I really like Tad lol. His humanoid turtle design is just really unique.

Thanks! I'll pass that on to Meghan.

@bh My version of Meghan's Alonzo...

Yes, because is on the design of your 3.1.1 BYOB Alonzo, this is my inspiration:

@bh My version of Meghan's Alonzo...

Did you like that? Did you see the shared characteristics?

Did you like that? Did you see the shared characteristics?

Oh, I forgot to show this:

I forever love your mascot, @bh, from an inspiration, to the default winner in this timeline.
I forever prefer the "BYOB 2.99 Public" version, because reminds me a lot of BYOB's best days, good job on your designs, I'm very happy to see this mascot to evolve like a Pokemon, you are too good in art and programming, you have to expand your most beautiful dreams, my friend.

"Remember: Don't wanna to give you up, don't let you down, you have to go forward, and evolve you."