I have a idea for new blocks

If it’s already possible can you show me the Script/JavaScript?

I don't understand this. By the reference to NOT I gather you're talking about predicate blocks? But a Boolean value is either True or False; there's no middle ground. Could you give an example? 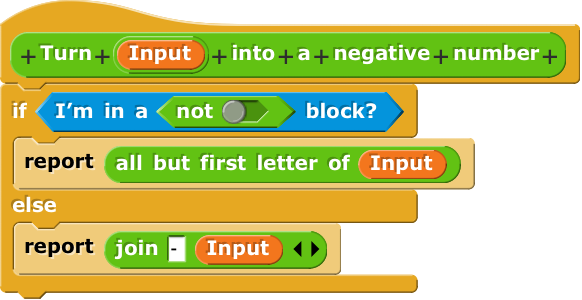 It’s the best example I can probably do

Why would anyone put that block in the input of a NOT block? That wouldn't make sense. And if it is in a NOT block, how does it help to report all but the first letter of the input? That won't be True or False; it'll be a string.

I think this is a solution in search of a problem.

E.g - a custom reporter that knows whether its inside a not block or not and changes it behaviour depending on whether it is or not.

There's two main issue with this in Snap!

Obviously, this isn't available at moment and it might not even be possible at the JS level without a major rewrite.

Alternatively, instead of trying to work out whether your block is inside a not, maybe add an explicit input 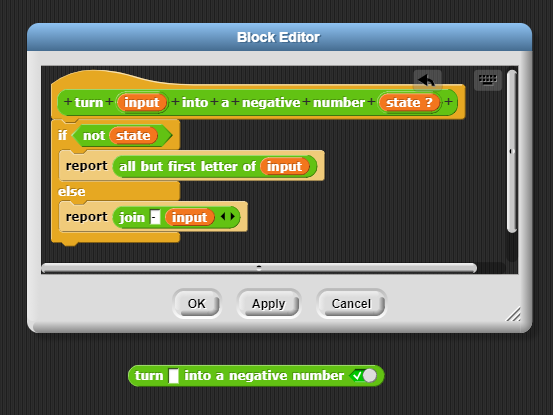 how does it help to report all but the first letter of the input?

Ok but how do I tell people what it does when off? (Also it’s a example, the real block detects if it’s positive or not)

Ok but how do I tell people what it does when off?

Do you mean how do you change it from true to false?

No not at all

It’s so simple I ran out of things to say

Sometimes, that is the way with ideas that seem obvious to ourselves - its very hard to explain them to others

So do you mean whenever you see <not (b)> you want to remove the not and just get (b)? To do that you just do <not <not (b)>> since the two NOTs cancel each other out.

@r4x what do you mean by detect blocks though

By whenver it's false do you mean?

(Or you could do

And this is not the wise thing to say to moderator if you wanna stay unbanned.

that's the way to get banned

Okay, this is getting way off topic. Let me try to bring us back...

So we'd need a really good reason to implement something that breaks that, in which a block decides to give different answers depending on who's calling it. And so far I haven't seen a real example of a good reason. That's why I said your proposal is a solution looking for a problem.