I have many projects where a sprite glides in front of another sprite. In Snap, e.g. https://snap.berkeley.edu/snap/snap.html#present:Username=s_federici&ProjectName=sunglasses, if the lower layer sprite has a speech bubble, the bubble is hidden behind the front layer sprite. This doesn't happen instead in Scratch, where speech bubbles are always on top of other sprites, e.g. https://scratch.mit.edu/projects/410615611/editor.

Is this something that could be taken into consideration in Snap? Or there are reasons in Snap to allow speech bubbles to be hidden by other sprites?

If this is a desired behavior, can someone point me to the methods to look at in order to allow my own personal copy of Snap to easily run projects imported from Scratch where speech bubbles are always on top of all sprites, without having to keep switching sprite's layers?

[edit: ] Oh wait! In current Scratch it's even worse, the speech balloon's layer does not change when the sprite's layer changes. Geez, that's clearly a bug in Scratch, don't you think?

lol, it's possible to do this 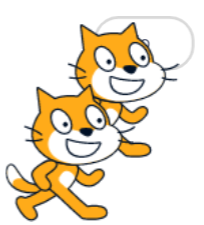 In current Scratch it's even worse, the speech balloon's layer does not change when the sprite's layer changes. Geez, that's clearly a bug in Scratch, don't you think?

This is certainly bad. But in Scratch a sprite cannot hide a speech bubble (do you have a counterexample?). In Snap instead sprites can hide speech bubbles (as shown in the two sample projects cited above that I have now correctly shared)

if you look at my post you can see that it is possible to hide a speech bubble in scratch.

If this is a wanted behavior (even if I don't see the point of hiding a speech bubble behind a sprite) this is fine with me. In this case, can you point me to the correct methods I should change in order to get the exact Scratch behavior?

if you look at my post you can see that it is possible to hide a speech bubble in scratch.

Do you a sample project showing this behavior?

This doesn't happen in Scratch 1.4. The bubbles always stay on top. In any case, this happens in Scratch 3 if you change the layer after the bubble has shown up. In Snap instead this can happens as soon as the bubble shows up, even if you don't change the sprite layer in the meantime.

And this is what I need: that the bubble stays on top of all sprites if you don't change the layer of a sprite.

In Snap! speech balloons stay ontop of the sprite they belong to, at the sprite's layer. That's an easy to understand, consistent rule. You can change the sprite's layer, and that also affects its speech balloon. Again, easy, consistent and predictable, giving you all the tools you need to control them via their sprites. Technically speech balloons are parts of their sprite, implemented as submorphs. I guess you could theoretically implement another architecture, treating balloons as separate morphs. But you'd run into a lot of complications if you did that, and you'd need to change very many things. I wouldn't encourage it. Also notice that Scratch's bugginess in this regard is an indicator that another architecture might not work any better at all.

I understand that the rule is technically ideal. But speech ballons are there as you are supposed to be able to read them. Hiding a ballon behind another element (except when it is really difficult doing something else if you keep dinamically changing the sprite's layers) it is not something that I would suppose someone could want as a standard behavior.

So, I guess I have to dig into this mechanism to try to square the circle.

Unfortunately I cannot understand the flow of Smalltalk code, but the treatment of speech ballons in BYOB is exactly what I need and what I think anyone would want. Ballons in BYOB are always on top.