Need help plz: End detection of a a bunch of launch block

In this project, i want to know if it is possible to detect the end of launch block

i put a launch block in a for loop and the effect is beautiful. I want to know if it is possible to detect if all the launch block in this for loop are terminated before i pass to another animation. Presently, i put a wait (2) secs block but it's not accurate...

how i can wait the end of the execution of all launched blocks ?

you could use my parallelization library

i will try it

and i got this:

2nd, i try this with same result:

To put a block in a list, i need to ringify the block
When i ringifi the block: it rignify the var against the value of the var 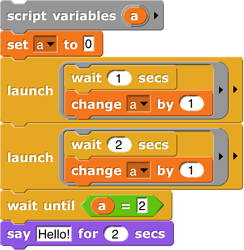 Would this type of method work for you?

The old-fashioned "call with inputs" and ring^2

I haven't seen a "grey ring raised to the power of 2" used in a script, yet.

Wow. Have you just invented this (or have you seen this before somewhere else)?

I'm not sure, but i've already used some form of this idea ...

The problem is that I need to return the blocks in a ring.

the 2 approach are at the end in the project

Can you help me plz

Thk's i will try it for sure

It works ! thank you so much !

it execute only the last one

No,
"do in parallel" does not yield and all actions are started at once.
Every "360 deg..." starts at the same angle and draws over the shorter lines.
With, non-warped, "for" loop, actions are started successive one by one with a slight delay, forming the fan blade shape.