I want to make variable watchers go to a specific position using a single block.

I'm not sure I completely understand what you want to do, but it sounds like you should just have one variable containing a two-item list.

I'm pretty sure you're asking for a block that moves variable watchers to a position on the stage. This is not possible without javascript. I remember, there was a topic a few years ago (2019? 2020? idk) that talked about this, and a 2 people made scripts to do it (including @bh, or at least he shared a script). I have no idea if the scripts still work though.

Do you remember the Javascript?

To get around this issue, I made a text to costume reporter that can be used with a sprite to turn sprites into controllable watchers

Contains other blocks to let you customise how they look

I also made pen variable watchers: Snap! Build Your Own Blocks

Equivalent using my blocks is 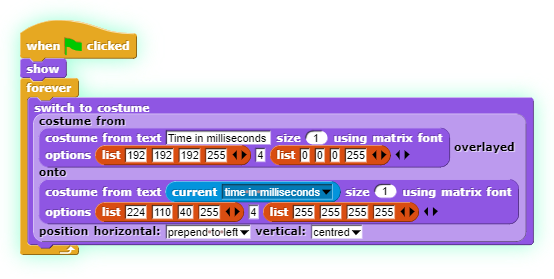 I also made pen variable watchers: Snap! Build Your Own Blocks

adding costume from command transform it into a costume... Don't affect pentrails!

Equivalent using my blocks is

If I just made them into one block like @joecooldoo , I could make it run faster but I like to keep the flexibility

Noice! This is perfect for my lazy self, thank you so much!