(this is not my finger)

Interesting. I was taught "dit" and "dah." Sort of like how cats make different sounds in different languages. :~)

By the way, after making the list once, you can put it in a watcher, right-click it there, and choose "blockify" to get a big expression with nested calls to LIST, so you can set it all at once instead of using a zillion ADDs in your code. (But I'm glad you made that list instead of having a zillion nested IF/ELSE blocks!

The ti is too long, try setting it to .2

if you want to run faster, just increase the tempo... 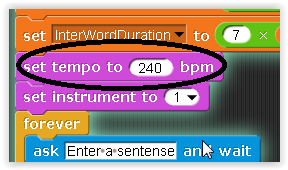 its ok, you don't have to be sorry because you speak a language

I added a slider for the tempo...

what does the update add?

this is not my finger)

what does the update add?

it writes the text in morse code.

Thank you for the "r", an error

It suddenly strikes me that it must be a little harder for French-speaking people to learn Morse than for English-speakers. I was taught mnemonics like "rePUBlic" for R (dit DAH dit) and "liBRARian" for L (dit DAH dit dit). But in French every word is accented on the last syllable, so you can't do that.