Currently, splitting variadic inputs by blocks simply puts all of the input's items as separate items in the list without anything else:

980×152 22.2 KB
I think this might lead to less clean code when dealing with analyzing variadic inputs, requires you to add special cases when another input is after a variadic input, and makes it impossible to differentiate when there are 2 variadic inputs in 1 block.
I propose 2 different solutions to this:
starbox614 January 8, 2022, 6:19pm #2

I've just released a patch (v7.0.3) that addresses this (and some other) issues. You may need to perform a "hard reload" (reload Snap! in the browser while keeping the shift key down) or to flush your browser cache in order for the changes to become active right away.

The way this works now is that you can control the arity of a polyadic input by fully collapsing it and specifying an input list whose first item is an integer representing the total number of slots followed by the contents of these slots.

Note that the number of list items following the first one does not have to match the number of slots specified in the list's first item.

Does that make sense to you?

in this project there is a block

that splits into that format.

That's for JOIN blocks. not SPLIT by blocks blocks.

in this project there is a block

that splits into that format.

Honestly I think this might be the best solution. Also, it doesn't take long to test if something is a block.

yes, sorry i am going to try to fix that

Honestly I think this might be the best solution. Also, it doesn't take long to test if something is a block.

Clarifying more about the confusion with block inputs, this is what analyzing a code input looks lke:

So a list property in a splitted block could either mean block input or variadic input, as both are lists.
EDIT: Actually, this won't cause confusion as direct blocks can't be inputs of an analyzed block, only list items representing analyzed blocks.

For what I'm primarily suggesting this for (my Snap! -> scratchblocks project) this isn't really gonna work for accurate or easy conversions.

I’m going to work on this. It will still only work on a predefined list of blocks, but You can edit that list, and I’m going to try to make it differentiate between different variadic slots
Edit: ok, this might be too hard for me
Well, I hope you find something that works for you

I think small-integer-based solutions are kind of kludgy. (I'm not excited about Jens' use of that either.)

There's a profound underlying problem here that I think might entail a redesign of SPLIT BY BLOCKS to solve. A real abstract syntax tree has a nonterminal symbol as the first element of every sublist. We haven't done that because we haven't written a formal syntax for Snap!, but maybe it's time to bite that bullet. So the JS Function example might end up looking like this:

or maybe including "variable" as a separate nonterminal from compound-expression if we decide that a variable reporter is essentially different from any other niladic reporter.

I hesitate to bring up such a major change to this introspection feature at this late date, but better late than never I guess.

No offence, but that looks like a really bad idea.

I don't know... it might be better, and maybe easier to understannd. 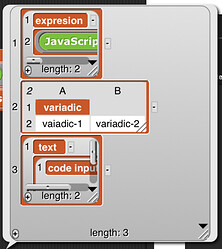 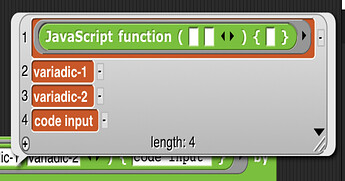 definitely not easier to understand. but i guess it would help with stuff

Ok, maybe it's easier for a program to understand it, but maybe not ideal for a human.

yeah.
i like the current syntax for variadic inputs, i just wish that it worked for split

I do think that the current syntax works for joining, but maybe not for splitting.

No offence, but that looks like a really bad idea.

You wanna explain why? (I'm not offended; it's not my idea but rather the standard practice in programming language research.) 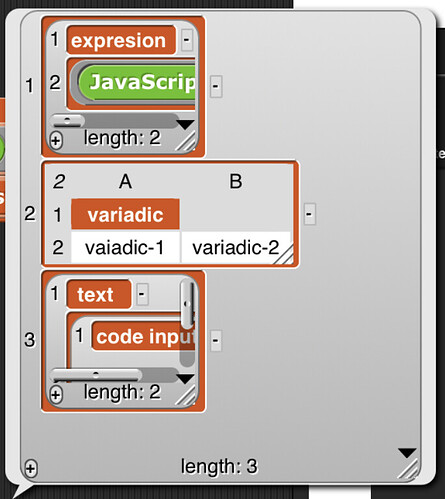 No, all the other stuff would be sublists of the EXPRESSION list; an expression consists of a block and its inputs.

it isn't very readable, it has a lot of more complex words like "variadic" "expression" that beginners wouldn't be able to understand at all. i like the current syntax, but i wish it worked with split