Using lists of commands and a probably inefficient algorithm.. I've created something that can journey far away from a point in a maze... sort of.

Feel free to watch and maybe even remix if you think you can do something interesting with this idea! Or maybe even make it to where it does something else?

Pretty amazing how it goes from not knowing any path to a pretty decent route?

Also for people who remix: If you make a map that is too narrow or claustrophobic at the start, it could hurt the bots progress significantly.

Yeah... I know, it's not the best thing out there but it is my best attempt, besides I still love and am fascinated watching it, so it was good enough for me. If you think you can, you could help improve it.

I can't improve it...I don't know how this code works.

Also it wasn't made to necessarily "solve" the maze, just to get as far away as possible from the starting point.

Well the title said "Maze-solving" so it's a bit misleading.

I elaborated in the actual post what I really meant. "Maze-solving" sounds better and is an easy simplification. 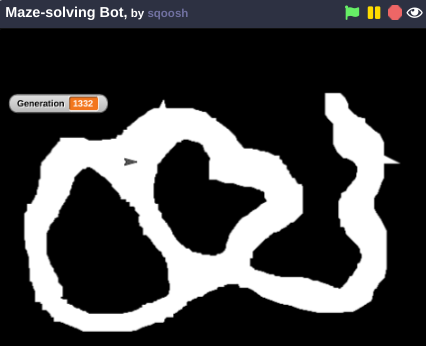 My robot decided that being lazy was the best course of action. Like the League of Legends bot server, who decided that both sides not getting points was better than a lose-win scenario.

This happens.. It will be stuck in a loop of deleting the first move (which is the move where they're moved back to the start), and then the project detecting that and fixing it, to where the bot just deletes it again.

I don't like that it happens, I wish it wouldn't, but sometimes the bot just decides that's the best course of action just from the way it is coded.

I'm on Gen 846 and the bot has decided to start backtracking for some reason...

Here is my version:

fascinated watching it, so it was good enough for me.

It is satisfying to watch kind of semi-autonomous behavior in bots. I like this kind of projects.

[offtopic]
SCRATCH IS DOWN
[/offtopic]

It does that commonly, I should probably make it to where backtracking at all results in punishment.

Take a look at my AI.

Sure does take a while, that is one thing that our AIs share, it seems you almost completely revamped the code.

it seems you almost completely revamped the code.

I started fresh. I never used any of your code. This is just a shorter and in my opinion faster code.

Oh I see. Personally I still like how mine chooses paths that it so pleases.. allowing for dynamic maps.