Maze game with a stamina system

(It is far from finished as each movement has its own predetermined path which means lots of time and I repeat it isnt finished so I know its broken) Ill start off by saying, because of the stamina system (which hasn't been implemented) only supports whole numbers i have to make predetermined movement which i accomplished with this code (image 1) which means there's a sprite, a position value, and 1-4 if statements for each location with a total of 47-50 the finished product will have around 200 if statements. There will be three levels, the assignment requires 2 but i added a tutorial level for the sake of understanding the stamina system. The reason the tutorial doesn't count is because you need 3 items per level and the tutorial only has 1 item. Along with this i need to add corn which is used to restore 3 stamina a rock which puts you at 2 stamina a big corn which puts the stamina bar at one but when you move, the stamina bar doesn't deplete. and a bunny that wants 3 corn(stamina) to let you pass and win 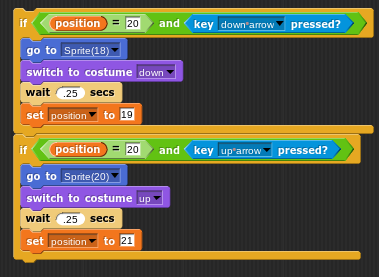