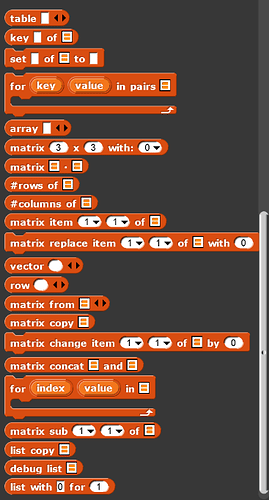 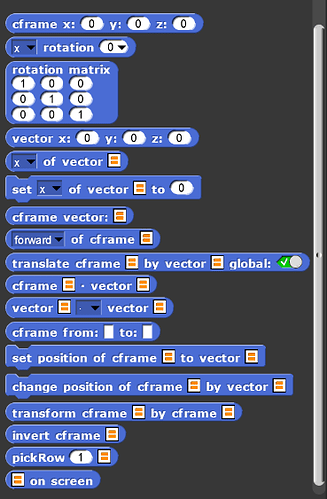 369×564 57.4 KB
Will most likely pack a few of these in libraries. CFrames use matrix operations in the background so those would need to include the others.
Just to invert a matrix, I use over 10 custom blocks multiples times...

1919×936 430 KB
I should probably try and make it a bit more compact.
Thoughts and suggestions from the mathy people on here accepted. I'm working on adding calculus approximation functions in the near future.
Comments on readability VS complexity
legoman3.14 December 16, 2019, 2:54am #2

Would you mind sharing the project? It looks really cool so far!

will add a couple of comments here and there, full of a bunch of unused blocks though.

full of a bunch of unused blocks though.

The "unused blocks" item in the file menu will give you a list from which you can check which ones to delete.

Nice collection. I'd be inclined to make general getters and setters for N-dimensional arrays rather than special casing vectors and matrices. And handle arbitrary length vectors, not just length=3.

You're making tools for a particular set of mathematical problems, which is fine, but I'd prefer fewer blocks in a library that can do all of linear algebra, planning ahead for when you study 12-dimensional string theory. :~)

Yea I just made it because the most important and useful tools seem to be matrices and vectors. Most things I wanted to do included them, such as machine learning, rendering, and some other computations. I haven't needed to use anything higher than 2D arrays for math so I don't know how to compute any of that. 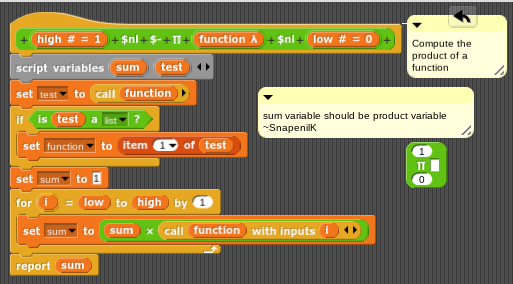 Yee, some of the functions have a bit of issues with variable naming bc i copied them over and forgot to make changes. I will eventually come around to fixing these bugs but in the future most of these functions will be rewritten in JavaScript to increase performace in Snap !.
Also to add on to the comment made a while ago, I try to optimize things for specific cases sometimes because it reduces complexity and improves efficiency as well. However, you can still do complex linear algebra with the matrix and vector library I added there. I have not added anything to get determinants though.