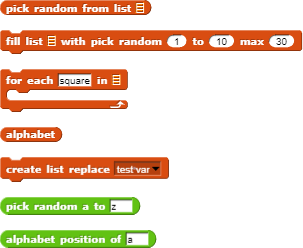 any more blocks i should make?

well its already done and i dont feel like changing anything, therefore i'm not going to change anything

That kind of contradicts this:

any more blocks i should make?

i'm not going to change the blocks that i have already made, since they work just fine.

thanks for the criticism

I made a remix here addressing

Oh and your ALPHABET POSITION OF:

but yes i should make it report something, brb

Maybe NAL? For Not A Letter?

BTW are you a 12th dev or something?

there is a very long very pointless reason for my username

I'm curious as to what that very long very pointless reason is.

i take it you want the reason

Alright,
my original username was "Tetra" which was just a random word
then it was "Decatetratris" which is an edited version of the word "Decahexatris" which is 16 rows in tetris effect
i then shortened it to "Deca" or "Deca.Slash" or "DecaSlash"
after this i changed it to "SwiitlyDeca" or "MrSwiit"
this name was horrible so i chose a worse name, "SNRGDecaOnGFuel" with snrg being a shortened version of synergy (made a very small clan with this name)
i then realized the stupidity of this name and changed it back to deca
i decided to make games and added dev to the end of deca ("DecaDev")
and then i thought it was too short and put do before deca ("DodecaDev")
sometimes if i don't want to put dev after it i use slash ("DodecaSlash").
My steam name contradicts all of this, as i'm in the ham mafia, and named myself "DodecaHam|HM|"
you asked for this

(sorry i do this all the time, usually goes no-w-here. nice letter choices tho)

What is that, and what rules does it follow?