Following on from Scratch forum discussion on the Snap Manual 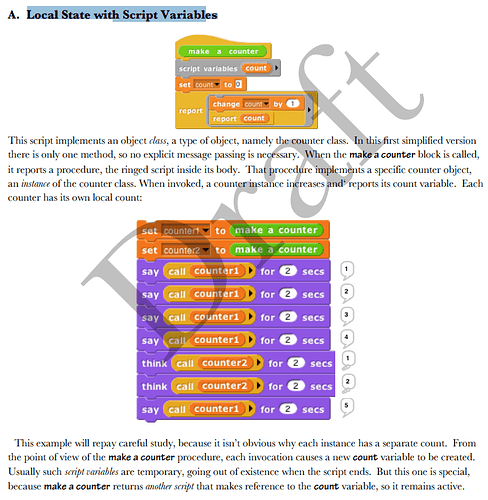 We are defining a reporter, make a counter, that uses a local script variable count

But instead of returning a simple value, make a counter returns a mini-script.

and because we are returning something containing a reference to objects/variables/blocks (not sure which) that are within the user-defined reporter make a counter, this keeps the reporter alive?

If i'm OK so far, then my next step is to understand that because the reporter is only returning part of its script (the increment and report value bit), then that is why it keeps incrementing and not resetting itself to 0 + 1 on each invocation.

How am I doing?

Consider a variable to be created by the script variables block, and never deleted, just usually made inaccessible. Snap! actually removes them to not leak on everything.

You're doing great, expressing the concept of a closure (a local variable that has become unreachable except for a procedure that survived the function that created it) very precisely!

and because we are returning something containing a reference to objects/variables/blocks (not sure which) that are within the user-defined reporter make a counter , this keeps the reporter alive?

If i'm OK so far, then my next step is to understand that because the reporter is only returning part of its script (the increment and report value bit), then that is why it keeps incrementing and not resetting itself to 0 + 1 on each invocation.

The way you're supposed to think about it is that everything lives forever (which is different from being accessible everywhere -- that's not the case), but the system is permitted to reclaim memory if it can prove that nothing points to it.

And, yes, the SET COUNT TO 0 is evaluated when you call MAKE A COUNTER, but the stuff inside the ring is not evaluated then -- that's the whole point of rings, to contain code without running it. It's when you call the ring (which you do by putting something that points to it in a CALL block) that those inner instructions are evaluated.

It's really beautiful. The "object oriented" languages think they have to invent special language features to provide local persistent variables, but, as the Beatles sang, all you need is lambda. (And lexical scope, so that the variables that are visible inside a procedure are the ones that were visible when the procedure was created, not when the procedure is called.)

I've come up with another view in my brain now 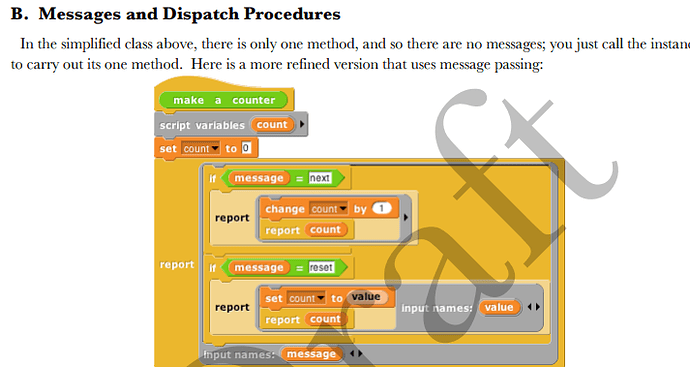 - is my simple viewpoint valid?

Hi Simon, perfect! In fact, I often use that exact explanation myself when introducing an audience to first-class functions and closures.

Here is my make a counter 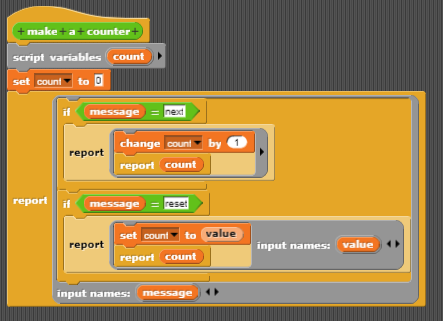 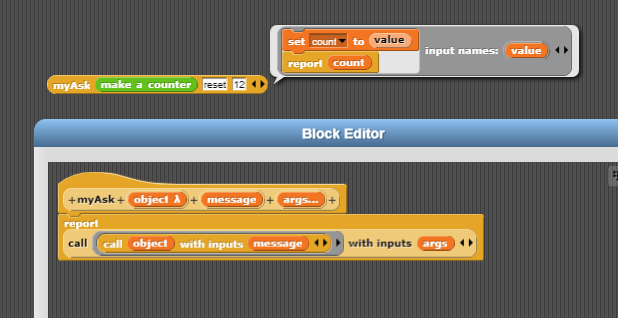 Oh, you don't need to make an explicit ASK block, just call the function you get when evaluating MAKE COUNTER directly. That is, you can assign an "instance" of what you get from MAKE COUNTER to a variable, say, "counter 1", and then just call "counter 1" passing in the message and parameter as arguments.

No, Jens, calling the instance with a message reports a method, which must itself be called. It has to be this way to allow different methods with different numbers of inputs, without hairing up writing the methods themselves.

To remove the unwanted ring, right-click on the inner CALL block and choose "unringify" from the menu.

Simon, the default behavior of CALL with respect to rings does the right thing for almost all straightforward uses, but once you start rolling your own OOP you have to think about where you do and don't want rings. Which you did, but you didn't know the mechanism to get rid of a ring.

I see it now

Maybe add the how-to in there for the next person

or have I declared my parameters wrongly somewhere

but it should be

You get the "input list" variant by dropping the args block onto the arrowheads at the end of the CALL block. You'll know you're in the right place because you get a red halo over the whole inputs area.

Yippee - finally got there

Moving back to the manual then..

silly me - should have read further down

OK - I'm starting to have ideas above my station now 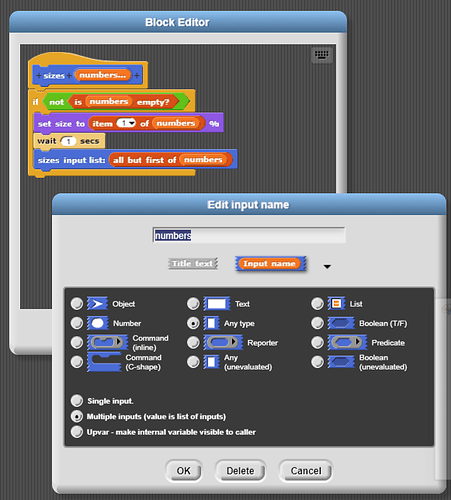 numbers is set to accept multiple inputs
Snap seems to automagically convert that to a list and processes it within the script as a list
But then later, we have to drop the next list onto the arrowheads so that sizes doesn't get upset that it is being passed a list

But since it treats an input list as a list, couldn't it automagically detect that its being passed a list rather than the programmer having to explicitly having use the dropping onto arrowheads.

Or is the overhead too much or is there something further down the rabbit hole that needs this technique?
Or should I go back to working in 6502 machine code?

So it's easier all around for us not to try to read the user's mind about this. Both recursion and variadic inputs are somewhat advanced techniques, so someone who's using both of them is old enough to read the manual! ;~)

It has already been solved.