As I was working with microBlocks (of John Maloney), I came to realize that list handling performance was very different if one declares a list and ADDs N elements to it, versus declares a list with N elements and then REPLACES these elements with the proper values. The REPLACE always worked magnitudes faster.

I tested the same logic in SNAP and saw that there was a totally reverse time difference between the two approaches.

Any reason for the opposite behaviour and why SNAP is so much better at handling element ADDs ? 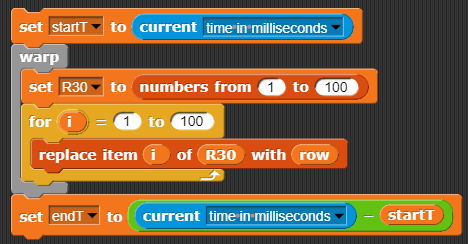 That # FOR EACH... block is written in Snap! and is therefore slower than FOR, which is written in Javascript. If you use the regular FOR EACH and keep an index count separately it'll be faster.

Jens had a good suggestion:

Cool. I'll put that method in my tools list.

One last related question:
Is it any faster to process a list element via a variable where "variable = item n of list" versus directly using "item n of list", if "item n of list" is repeated many times in a loop ?
Since the first method is a bit faster with calculations, I was wondering if the same logic applies to lists ?