Javascript extensions at the moment

The question comes because I am reviewing old projects that I had saved and some have stopped working and I don't know if I have to do something special to make them come back.

[edited after I read a previous post of yours and saw that your an educator]
Older projects might still be able to be opened and run with the last V6
https://snap.berkeley.edu/versions/previous/snap.html

If what doesn't work for you is from a Snap! library:

(Exception: If the library that doesn't work is the Getters and Setters one, you have to turn on JavaScript Extensions every time you load it. Sorry. Long story.)

If what doesn't run is your own JavaScript code: See if you can use one of our libraries instead. If not, you'll have to turn on JavaScript Extensions every time you load the project.

And one last question, are the snap extension libraries still working? I've been trying to access it all morning, but I get a banner that says "Loading...whatever" indefinitely.

And one last question, are the snap extension libraries still working? I've been trying to access it all morning, but I get a banner that says "Loading...whatever" indefinitely.

Is there somewhere a list of the extensions of each category? It's just that I'm trying to do what @bh says, but the project keeps complaining when I click on certain sprites (trash can, for example) and I don't see anything that I haven't already imported.

The project is this.

The problem is that some blocks no longer exist...

block no longer exists in the current version of Snap.

If you don't want to modify all the code, you could modify only the block in question like this:

Question: do you have several other projects that no longer work?

If so, one solution would be to make your own library containing your own version of these blocks and then import this library into one of your old projects.

has been replaced by

New version of the block: 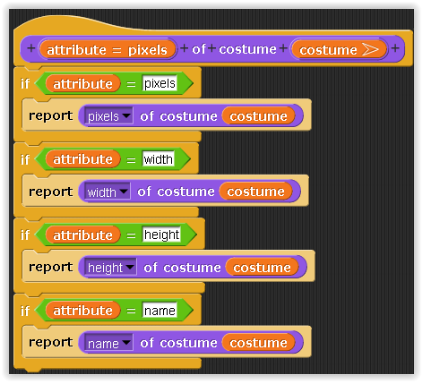 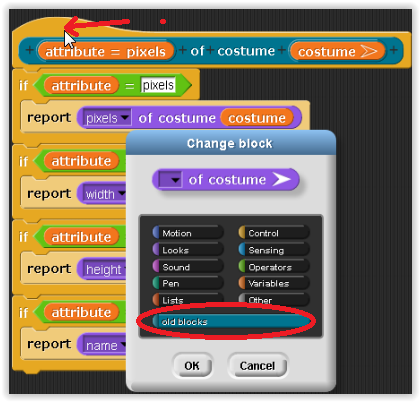 3)Save your library (export block) 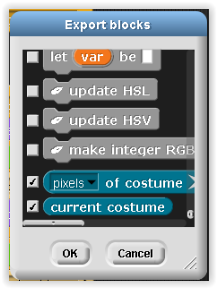 Thanks for the idea @loucheman, I'll give it a try.

Just use call to put it into the first slot.

Oh, i miss it thk

The same way you loaded the library the first time: File menu>Libraries.

If any of the library blocks have changed their appearance, e.g. the change from an Object-shaped input to a text input that loucheman mentioned (although he was talking about a primitive), you have to change your code to call the new version.

Is there somewhere a list of the extensions of each category?

I'm not positive I understand what you're asking, but I think it's this: In the File menu, choose "Export blocks..." That will open a window in which all the non-primitive blocks in your project are listed. After you find what you're looking for, you can just click Cancel on that window, because you don't really want to export a block library.