I've made a block that gives you the expanded form of a number!(Decimals work!)

I've made a block that says the expanded form of a number! Here's what it looks like:

Here's the code and the link to the project! 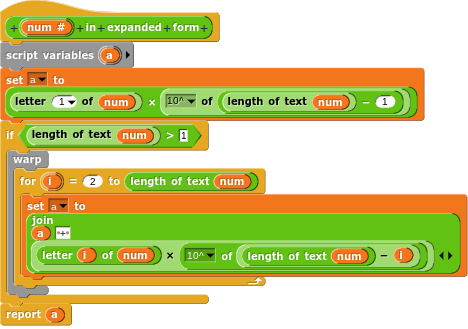 Hmm, could I suggest having the individual numbers in a list instead? That would be more useful for operating on them later.

Hey this is really nice..

You can actually do it all with in one block:

great block, but this is what I get with a decimal

which you can tell that it's wrong.

Yeah. I haven't programmed it to deal with decimals yet.

It would be really cool with decimals.

I did it! I managed to get it to work for decimals! And even though it works, to me, just looking at it makes my mind go limp because it's so complicated!

Here's the mind-boggling code for it: 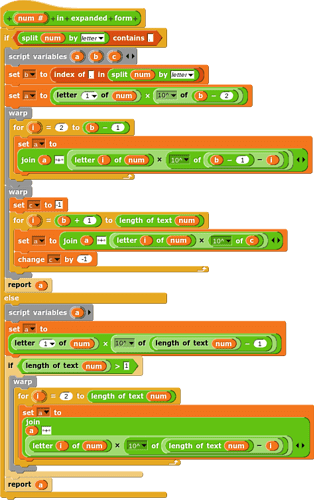 @helicoptur It now has the option to be a list OR a string of text! You select which one you want it to be!

I'll put the code, but you might have to zoom in in order to even see it.

Yeah, but then you can't see the entire script.

I did it! It now works with decimals!

Why is it so long? There has to be a way to do it that doesn't use that many blocks. So I sought out the solution, and I found it: 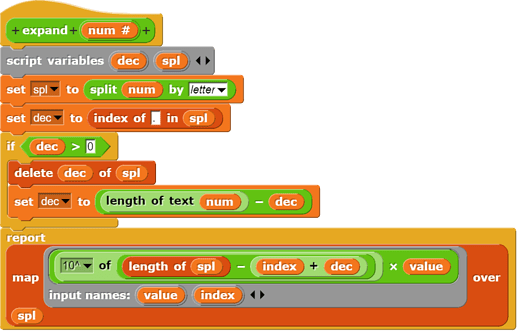 untitled script pic (1)934×604 92.4 KB
This is basically @legoman3.14's solution (actually we came up with the same solution-- I made what legoman made and was unaware of it). The difference is it finds where the decimal point is, and shifts everything based on it. This actually outputs a list, if you want it to output the + stuff you simply do this:

(There's a floating point precision error at the end, and it's not my fault)
(I didn't test it beforehand but interestingly it still works if you omit the whole number [like in ".3"]. Yours doesn't.)

P.S. Can you modify that to account for negative numbers? I did it myself very easily, but I would like to see you do it.

You can actually do it in just one block:

This is the same as my original idea that does not work with decimals, except it bases the power of 10 to multiply by the length of the part before the decimal point, instead of the overall length.