Is this considered as reverse codification?

then I created another block that reverses the process. Is this considered "reverse codification?"

This block turns the command to a string:

And then it can be reversed with the other block: 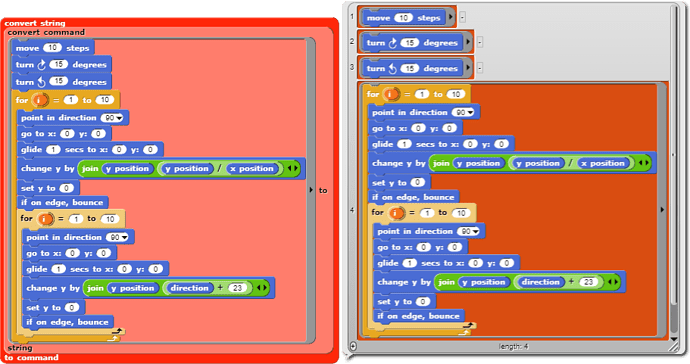 Could I see the project?

it's a very big project, I can't reveal it now but in the future it will be published

I assume blocks -> string is done by just replacing the blocks in a blocks-splitted script with text then JSON of ()-ing the list, right?
Then I think string -> blocks could be done by split by JSON-ing the text, then replacing the text with blocks then JOIN-ing it with the inputs.
I'd say it's reverse codification*, with an asterisk. It's more like splitted block conversion.

yea, you are right

. But instead of reporting a list, it should report the command itself.