Is there a way to transfer data through scenes?

Yes, click the right arrowhead twice in the SWITCH TO SCENE block and you get

untitled script pic890×74 13.2 KB
The message ("and send") should be a text string (or the green flag in the pulldown), but the "with data" can be an arbitrarily complicated list. But you can't send procedures or sprites, because they would end up dragging in the entire environment of the old scene.
desertjetdoctor September 3, 2022, 5:44am #3

@bh does that mean you can not send a variable through scenes? I've been trying too but i can't figure out how.

does that mean you can not send a variable through scenes?

I'm not sure exactly what you're asking. You can certainly include the value of a variable in the payload of the message you send (as long as that value isn't a procedure or a sprite). And, since the payload can be structured however you want, you can include an association list of variable names and values, and have your new scene react to the message by creating the variables and giving them the values. But you can't cause a variable to be created in the new scene automatically.

I made a coin as a variable and I’m asking if I can send the amount of the coins through scenes.

Yeah, sure, you can put the quantities in a list and send that in the data slot.

Can you please send an example. If you can't that's okay, I'll figure it out.

In the starting scene:

In the new scene:

If you have the different coins in different variables, you can 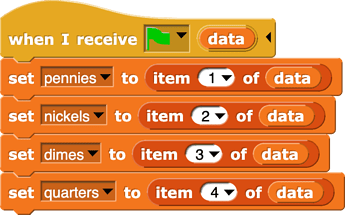 Is there a way to make the list automatically update?

Is there a way to make the list automatically update?

Umm, yeah, you write code that updates it! Or, if you're using separate variables for the different kinds of coins, you generate the list at the last moment, just before switching scenes.