Is there a way to import the Tensorflow.js library to do machine learning with Snap? Was thinking of making some interesting projects involving maze navigation and simple game playing.

No problem importing TensorFlow.js but I've seen with heavy use occasionally Snap!'s display become very broken (much too small - parts stay black). Since both Snap! and Tensorflow.js rely upon WebGL I think Tensorflow.js can take GPU memory that Snap! needs.

Instead of tracking this problem down and addressing it directly, I chose to run Tensorflow.js in an invisible iframe. Snap! and this iframe can communicate via postMessage. This way they are separate pages and at least in Chrome protected from each other. And that opens up the possibility to show the iframe to, for example, visualise training progress.

Thank you for reporting this. Fixed now. Very sorry about that.

thanks for the cool API though. how do i go about importing the newest blocks into an empty snap project?

Hi on https://ecraft2learn.github.io/ai/ there are these links:

Enabling your projects to create, train, and use deep learning neural networks. Project or library.

The Project link is the library with sample usage and some documentation.

Training loss has become 'not-a-number'.
Not sure what I did wrong..? 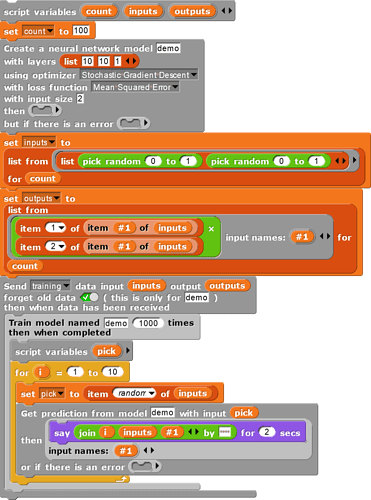 This is a problem that occurs for various reasons. Here's a Google search with many hits discussing this.

The JavaScript underlying my Snap! blocks tries to catch this and then inform the user. Did you see something like the following?

My experience has been that I see this a few percent of the time and choosing a different option and it goes away.

If there wasn't such a message let me know where the error occurred and I'll improve the error handling.

I only got that very first part in the developer console and in the first message box it showed. 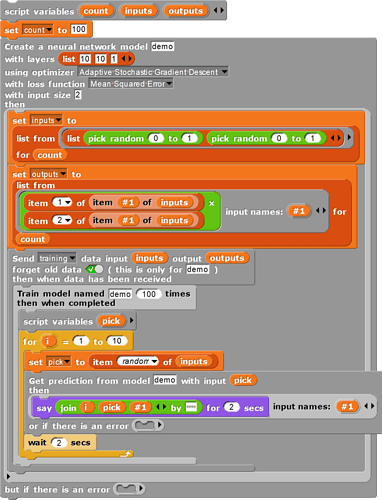 Nevermind, go it to work fairly well and i tried it with signed numbers as well 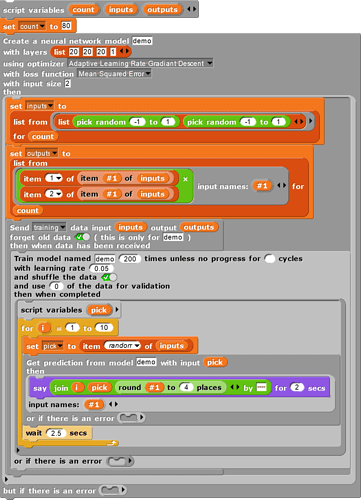