Finally got a basic working version of a native Snap! GIF file reader 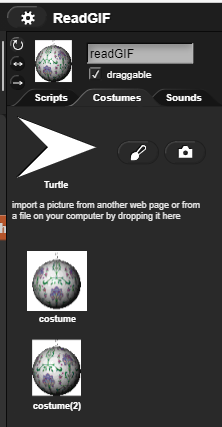 To use - click on 1st script to load a GIF file in and then click on the 2nd one to convert the file into costumes.

Hey all. I made a library that allows the user to import files from their computer. Here is a project demonstrating this: https://snap.berkeley.edu/project?user=pumpkinhead&project=file%20import

I'd be glad to test, but it's so increadibly slow. 20 seconds? No, it's tens and tens of minutes.
NB My computer is fast enough

The script is in a debugging mode state

Am I using this wrong? because I uploaded a file and clicked the long code....and it only just turns into a turtle.....

Btw, what does this mean when it says:
"SW2 unexpected byte in GIF File read"???

Probably, despite its name, the imported file is not a GIF image.

But it was a GIF image---I had it as one of my pfp's once---here's the image I am trying to upload: 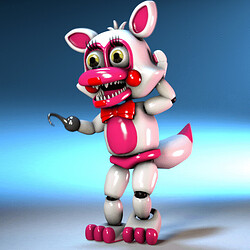 It's JPG not GIF!

I'm guessing that the file is quite large and that you probably pressed the script again.

Try a smaller file if you've got one

sigh...literally all of my gifs are jpeg...

Btw, what does this mean when it says:
"SW2 unexpected byte in GIF File read"???

Here is an image with just one frame:

It took 11.5 mins to load it.
And it was loaded with issues: 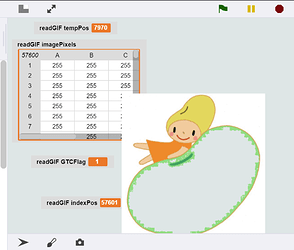 After limiting the UI update with turbo and, quick and dirty,

the frame was imported in 100s (on a low-end notebook).

Yes, now it was loaded ok and - with @dardoro's trick - for reasonable time.

Tens of minutes - I meant another gif 800x400 with several frames. Will try again now

Great project! It will be a very useful tool!

Just for those interested in the method behind this code, this is the article I've based it on

This GIF breaks after the first frame.