I want to make an halloween themed 2D beat saber-like game, any tips or ideas?

Ok, i'm alive. I woke up later than I had planned.

There, I said it.

Will be back tomorrow because it's time for me to go and get some sleep.

I added the Score system, blocks and special effects, it was actually easier than I thought! Although it has a lot of lag (Is there a way to get rid of the lag?).
What do you guys think?

Also, try not to touch the purple blocks, it will reset your score. Best played in full screen, should I make it more difficult?

Is there a way to get rid of the lag?

If you reduce the number, that should help speed things up

Problem already solved by @kinestheticlearning in a different topic I made.

Well - that other method doesn't work well for me 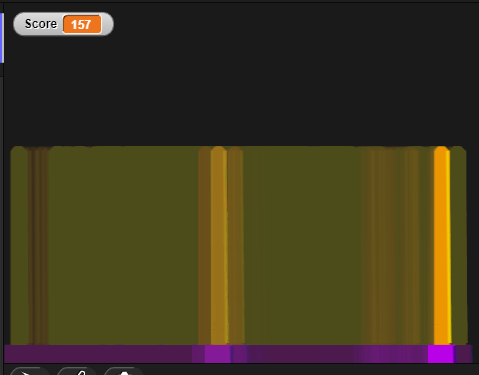 Thanks!
But kinestheticlearning's technique works well without any lag!

That's why I am adjusting the time that it turns fully transparent. 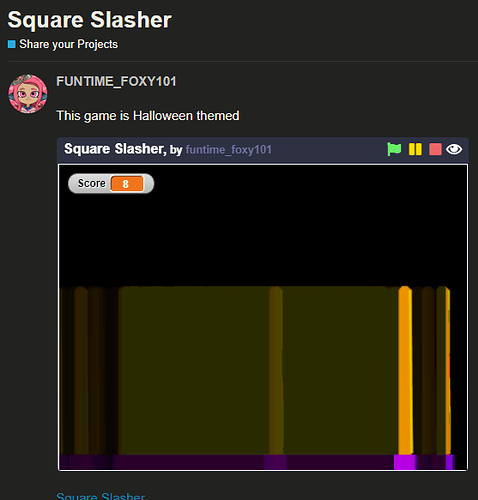 I am working on a duplicate of the Square Slasher but with my original clone method. I will try to reduce the lag, but i'm not sure if it will look the same if I do.

In fact, it's not even going to work with my original method, the entire game will freeze because of the lag.

What value have you tried using instead of your original 300?

I used 10. It will still break the project.

Proof it will be broken with my method;

You can't even move

EDIT: fixed it kinda I guess.

Congrats, it works your way, too.

Plays great on my computer

(just added a clear to make it a bit cleaner)

Huh, all I had to do was delete the overlay for my method because it had no use being there(because it doesn't use stamps).

I will add that for extra cleanness, don't worry.

EDIT: fixed it kinda I guess.

Now open it and Save As Square Slasher to overwrite the existing project because the clone method is now better then the stamp method. Be proud!