I think I broke Snap with broadcast block

I have no idea what I did while fixing @oscar_robinson 's Sky Ship, but what I do know is this isn't supposed to happen. 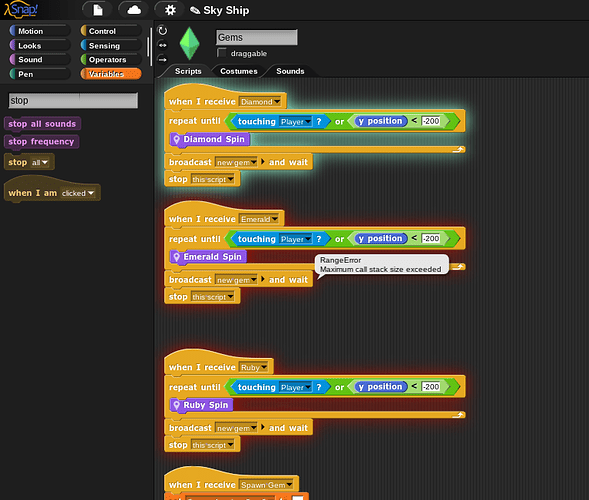 ?
What do you mean?
The projects fine

This error usually means infinite recursive/circular call.
"Broadcast and wait" probably call each other in a loop.

this should explain it.

This error usually means infinite recursive/circular call.
"Broadcast and wait" probably call each other in a loop.

In a nutshell: The broadcasts are broadcasting each other causing an infinite loop.

I’m gonna stop replying to this, I do not get it:(

this is basically what they're saying

By the way. @ego-lay_atman-bay it automatically deletes a ,,fade'' effect for blocks. Before it, I have this:

but after this I have this:

Yeah you have to refresh. Why does it stop fade effect?

Yeah you have to refresh

No. I haven't to refresh.

Yeah, but what would do you when this script which wait will needed?

It will wait an infinite time, I think. Only if the broadcast block doesn't error.