I need help with randomizing costumes with different costumes

So I have 3 identical sprites, all with 3 costumes. My goal is to make a randomizer where it randomly chooses one of their 3 costumes when I press the green flag. HOWEVER, I want all 3 to have different costumes from one another. how do I do this? this is my code so far:
BTW I don't know if the images will show, if they dont you can ignore this part 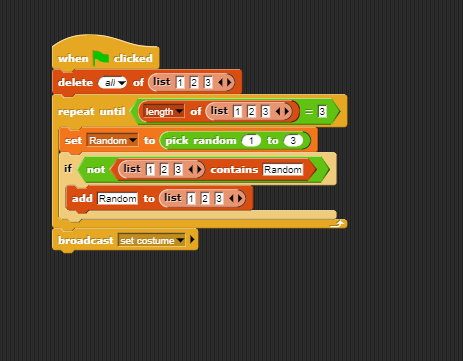 This code is on the stage script, I think it makes 3 random numbers and broadcasts it to the sprites,

this code is on all 3 sprites, it receives the broadcast and gets one of the numbers
PS. I don't know if the images will show, if they dont you can ignore this part

You seem to think that (LIST 1 2 3) is the name of a list, but it's not. It's an active procedure; every time you call it, you get a new list with those items in it. It's an understandable confusion; in Scratch lists have names.

The way to give a list a name is the same way you give anything a name, namely you put it in a variable.
(SET [costumes] TO (LIST 1 2 3))
where costumes is the name of the variable.

So, when the green flag is clicked, you do that SET and then you shuffle the three numbers so that each sprite has a unique costume. To do that shuffling, you need to use the
(PICK RANDOM FROM (1) TO (10)) block in Operators, changing the 10 to 3 of course.

I don't want to tell you the shuffling algorithm; you should do that.

watch this project, it will help you... 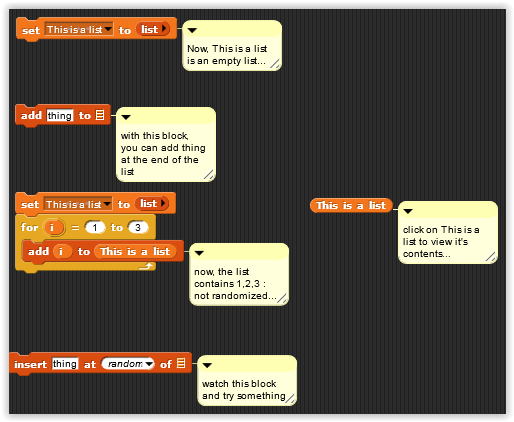 and did you know: