I made a game similar to fruit ninja, but with vegetables. When i pass round 2 it says i lost round two and the restart button pops up and at the same time round three starts

i made a game similar to fruit ninja, but with vegetables. When i pass round 2 it says i lost round two and the restart button pops up and at the same time round three starts.

this is all i can do with your given information

Here is the link my program:
https://snap.berkeley.edu/snapsource/snap.html#present:Username=tshah21&ProjectName=Vegetable%20Samurai%20Create%20Task

Honestly, your code is really clunky because there are a lot of things that do the exact same function, but with slightly different changes. Do you really need all those vegetable sprites? You could just make a parent vegetable sprite with all the vegetable costumes and then use the

block. Same goes for the round broadcasts. You don't need multiple, you only need one. You even have a "round" variable. You could just check which round is being played using only one broadcast and the round variable, like so...

Well, anyway, it's because of these scripts inside the "Rounds" sprite 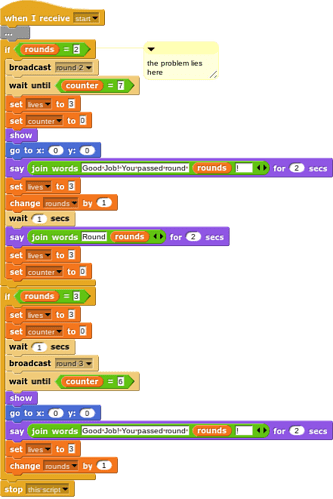 In the second script, when the event is fired, the counter would be 0 because you set the counter variable to 0 before checking if you won.

If you do fix that, the bug will still be present because the counter variable would be 7 since there are seven vegetables in round two, and you change the round before you actually start round three.

In the first script, a set counter block is in the wrong place. I don't know which I should move or remove, though.

Thanks for helping me, but I am still not able to fix it because I am not sure what is wrong. Can u please fix it for me thanks!

can anyone give response on the same query ? i need feedback asap.
thanks

and they were never heard from again.