I made a block that writes numbers in binary!

I managed to create a block that converts a number into base 2! It took an hour or two to make, and a ton of debugging, but I finally managed to get it to work!

P.S. It works with negative numbers!

Hint: The best, most elegant solution is of the form 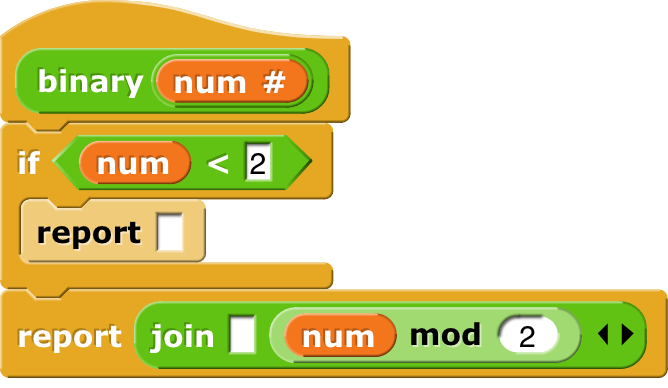 (you fill in the blanks). An algorithm that's a bit less elegant, but I'm told is easier for learners to understand, looks like 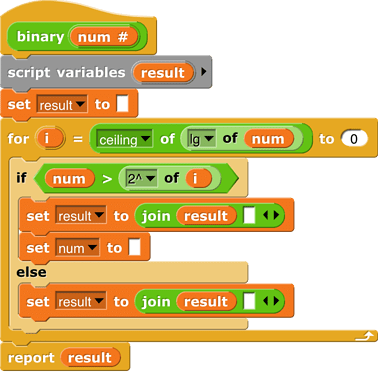 Okay. I edited it and gave the variables more clear names.

P.S. It seems much longer, and it is, but the only difference is the variable names' lengths.

Ah, thanks! Now I get what you're doing. Don't you see how much clearer that is?

Your last REPEAT UNTIL block is like my second algorithm. Apart from remembering the sign, all the stuff before that loop is because you don't know about the lg function, which takes log₂ of its input. (Log, if you don't know it, is the inverse function to exponentiation. Basically it tells you the largest power of 2 in the number.)

I got an error:

There. Fixed it. The problem was that I misspelled "is num negative?" and wrote "is num negitave?" which are two completely different names.

Apart from remembering the sign, all the stuff before that loop is because you don't know about the lg function, which takes log₂ of its input.

Oh. That would be really helpful if I knew that before I started programming it. Thanks!

I made one where you can convert a number into any base. (only up to base 16)
Here's the link: Number Converter! by dms_64

Does not work with negitive numbers yet!

It works with negative numbers now!