You can put a list into the "broadcast" or "broadcast and wait" block. The first item is the message name, and the second item can be either a sprite object or the sprite's name. For example:

You can put a list into the "broadcast" or "broadcast and wait" block.

I never new this was possible. You learn something new every day.

It could also be the

Isn't it in fact a "When I receive" block the only block that decides if the message is "intended" for a particular sprite or not?

I know, but it creates a new clone and when you use the my [clones v] block, it broadcasts to an already existing clone

i don't know what that's supposed to mean

Yes! And you can even build your own SEND block 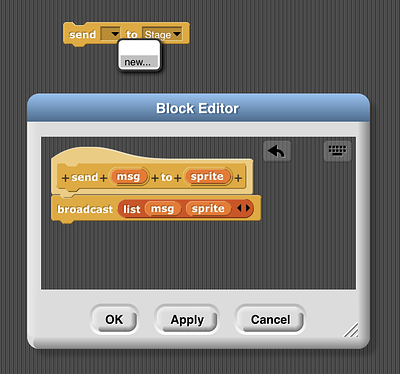 that lets you select a message and a target sprite: 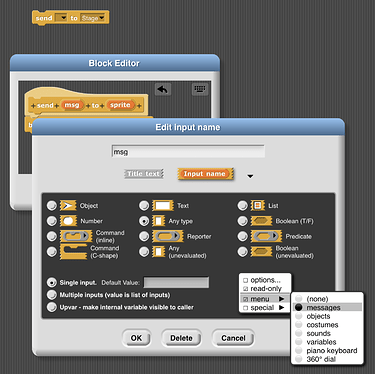 Could we consider making this a standard block of the blocks palette?

I love this, this is an insanely good and handy feature, but unfortunately very well-hidden (and broadcasting a list like that also looks like something a student might do by accident, not because they meant to)!

Hi Sven! I guess it could be an additional primitive, and that might even be better than the list kludge. Lemme think about this some more, and let's maybe discuss it when we meet next week

Maybe you could put using the list method in the help screen, so that at least it is more visible than it is now. I wouldn't be against as a primitive, though.