Our school is currently trying to teach Snap, which is super exciting! I am one of the TAs who is responsible to develop course content. We plan to teach students how to play around with SciSnap. I downloaded this zip file here http://emu-online.de/SciSnap.zip and used the instructions to implement scisnap in the normal snap Snap! Build Your Own Blocks.

At the step that I dragged SciSnap!-Starter.xml into Snap, the additional categories shown on my palette. However, after opening the SciSnap!.xml, the categories disappeared.

I tried several laptops and it just does not work. Can anyone help me on this? Thanks in advance!

I read the instructions (readme.en), and it never told me to import SciSnap!.xml. Also, SciSnap!.xml is a project file, so everything you did before importing it will be lost (unless you saved it). Also, I'd suggest you import the SciSnap! library in the snap libraries menu instead, as that doesn't require javascript extensions to be on.

I can only run the two line code "When I am clicked, switch to SciSnap!" after enabling java extension.

There's a huge difference between javascript and java.

I meant, in a new project, click the file menu > libraries. In that dialog, click on SciSnap!, then import. This will import the SciSnap! library, which, I think, is the most recent version of it. This library also doesn't need javascript extensions enabled, and also can update the functions without having to reimport the library (because it gets all the functions from a url).

Ok ok ok, what you wanna do is import SciSnap! through the "libraries" option 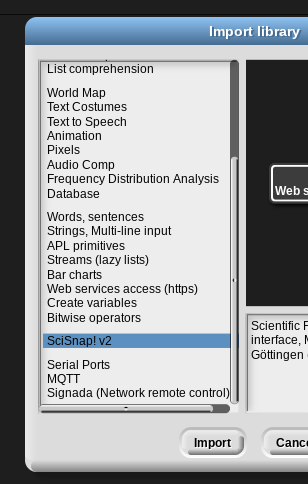 and then once you've done that, every time you open the project, you have to click this block

Got it! Thank you so much! I can use it on my laptop now!

omg i dont know they have a shortcut for that! it seems like they need to update the zip document lol. THnak you so much!