How to Get the Frames and Audio From a Video Uploaded via a File Import Library?

It was never coded in, so you'd have to search it up.

It was never coded in

I know that - Also I'm not finding any results.

I can't test it out right now, but I think the file is just a javascript object.

It doesn't? Not even in google chrome on desktop? I knew it didn't work on mobile, but I do know it did work on desktop. Unless you're just not enabling javascript.

I am on Google Chrome on desktop lol. I meant it gives an error when trying to read the file.

Well, what does the error say?

I don't think you can use the library to import movie files.

You can import any file, you just have to write a script to read the file.

This is going to depend on the encoding formats used for the audio and video. It'd be easier to separate the audio from the video (maybe VLC could do that?); then you could just drag in the audio to make it a Snap! sound. As for the video, you'd have to write some code to extract individual frames and turn them into costumes with the NEW COSTUME block.

How would I get the video into Snap! anyway? The file import library by @pumpkinhead doesn't work with mp4s. Trying to upload an mp4 crashes the webpage.

Trying to upload an mp4 crashes the webpage.

how long is your video? I have no problem with importing them, well, on the videos I've tested.

it gives an error when trying to read the file.

it can read the files just fine, unless you use an unsupported file type. but I think the error you're talking about is this one

it's probably happening because of how the new broadcast block works. I get no error when I click the arrow. I guess someone should fix up the library to make these things work. 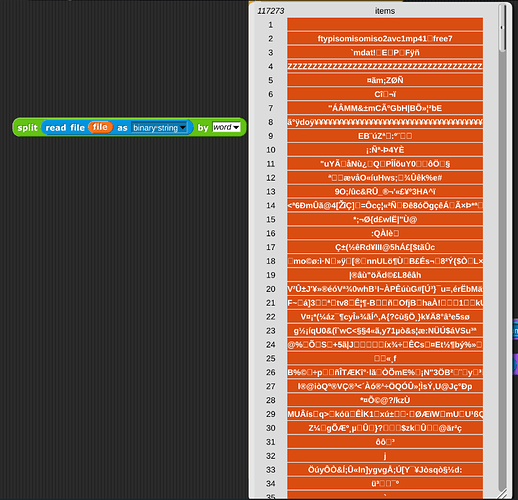 How am I supposed to parse this?

I don't know. I know nothing about video encoding.

Then I can't use the library.

So I did this:

don't give up hope, I was able to find this Edit fiddle - JSFiddle - Code Playground it's a script that can get the audio of a video. I might be able to get it into the file import library.