How to create a costume and add audio

This is a simple basic tutorial for beginners! (Tutorials for Apple iPad and maybe iPhone)

First we have Costumes

To upload a file you must click the drop down menu then click the button circled in black (import.)

When you click import you will be met with three choices including Browse, take a photo, and photos. Again this is on iPad. To import a photo press browse and to take one of your surroundings do Take a Photo.

Here is how to upload Audio to a project.

First you will click the tab right next to costumes called Sounds. After this you will have to have a Audio File and do the same thing import than press browse than drag the audio file you desire below the Sounds tab. To make the sounds play you will have to use the Sound blocks which are back on the Scripts tab.

Hopefully this was helpful to you! And yes I do most of my coding on an iPad with a keyboard added to it. I know most of you guys use PC. I find it easier to Upload things on iPad. As long as you do not use the On-Screen keyboard.

Note: Never use inappropriate audio, images, videos, etc. If you do this you will probably get ban or punished.

I hope this helped you I know that my Brother struggled with the images on the using Files instead of Images! This is also my first tutorial and I might make more that may be more complicated.

if you're on android, you can choose any file on your device, including files from google drive.

Well I’m on Apple I will add that.

Edit: Added also this is my first tutorial so I do not know if I should have added other things. -Earth signing off it’ll tomorrow cause it’s 10:20 here.

(windows) Also, you can drag an image or a sound from file explorer to the sprite editor... 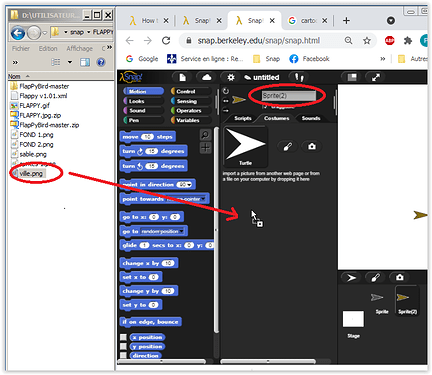 or drag a recent downloaded file in the sprite editor: 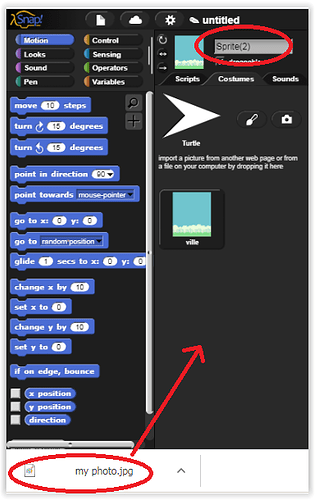 That works on all computer devices, I think.

My tutorial is for iPad.

Yes, but this works on all devices. maybe add the computer tutorial that @loucheman made? It also works for chrome os to.

But I do not code on laptop that much.

I go on mobile to sometimes.

I mostly use Mobile but never use the on screen keyboard for anything. I just used a attached keyboard. I am on PC currently.

Could I confirm whether I can add Spotify audio to a project? I have already downloaded and converted Spotify to MP3 audio files via AudFree SpoDable. The Spotify files are local and common tracks I can locate on the hard drive of my computer. They can also be transferred to other devices, like Android phones, iPhone, etc.
When i click the Sounds, whether it can retrieve my audio?

If I understand correctly, you need to right-click the sounds and click "Export."

I am pretty sure you can. It is not fully owned by Spotify but owned by the song writer and performer who you can also find on YouTube.