How do I make a sound echo?

I want to have it use only one sound and constant volume (no volume changes using the [set volume to ()%] or the [change volume by ()]).
I would like to use it in some audio editor project I'm planning to make.

I think the echo has to be quieter than the original sound, or you'll end up with a horrible feedback screech instead.

So, as I guess you've already figured out, the easy way is to play the same sound 1/10 second later, quieter, then again 2/20 sec even quieter, etc.

If you want to turn the sound into a different sound with echo built in, you should take the samples of the sound, add to that list of numbers the same list multiplied by 1/2 and delayed by, umm, 4000 samples or so, etc. Then make a new sound from the result.

I tried what you suggested, and here's my script 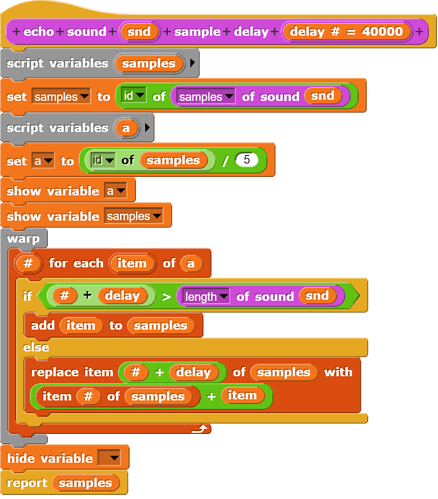 echo script pic760×866 131 KB
It gives a somewhat good result. My only issue is, I don't know how to make it echo sooner than it does. I also want it to echo more than once, but I assume I can just run this script multiple times.

here's my project Snap! 6.9.0 Build Your Own Blocks

I can already tell yours is much better than mine, although I did notice a few mistakes with yours. You forgot to add one channel support, but that's a super simple fix. The other is, sometimes it cuts off the sound before it's finished. I was testing this out with the "Kitten" sound, which is one channel and a small sound.

Oh, a one-channel sound isn't just a list of length 1 (with a huge list as the one item)? Sigh.

I'll look into the cutting off, but is it just the echo that's cut short, or the (copy of the) original sound too?

is it just the echo that's cut short

Awesome, thanks for testing, and reporting the bugs.

It crash chrome : out of memory

How i can fix this problem ?

Try a shorter sound, I guess?

Work fine with the kitten sound...
How i can allocate more memory to chrome (win 7)

Open task manager and kill processes that take up a lot of memory. Be careful, though- some can be SYSTEM processes. Make sure the user for the task is YOUR user.

his computer may not have much memory. I think it might actually be that.

How i can allocate more memory to chrome (win 7)

i have 1go of free memory before i run the script

welcome to the forums @sullivan658 and @richard7082

well, how much memory does your computer have in total? because, 1 Gigabyte is not a lot.