How do I import a costume from a folder on my computer?

There's no silly questions but.....

I can see the drag and drop option but can't see a simple - import - select folder- select file method.

But, that method didn't leap out at me to use for a costume import

Could I make a feature request to have a button next to the other costume buttons please? 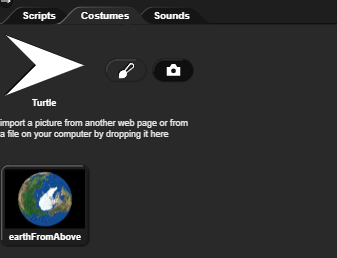 I don't know if there's an easier way to go about this (other than drag 'n drop, of course), but if you would rather search through your files, you can hit the paper-looking icon in the top left, then hit "import", and select your costume.

It should then get imported as a different sprite, then you can just drag and drop the costume from that new sprite over to the desired one.

Drag 'n drop is much easier though, so I'd recommend you continue using that.

If the costumes tab is open and you import an image, it adds it to that sprite. I never figured out how to drag and drop, so I just use that.

(You export a sprite by right-clicking its icon in the sprite corral. The exported sprite includes not only its costumes but its sprite-local blocks, its scripting area, the works.)

PS About the button in the costume tab, yeah, I agree. But it's not urgent so don't hold your breath.