How can i make a script in the code?

wording it like that makes me sound like an idiot, but i'm trying to make it so that i can put two blocks in a reporter and get it to report two blocks one over the other, connected.

i tried most other reporters but none seemed to work, any help?

Can you give an example of two blocks and what you'd expect the reporter to report?

for example, giving it a "move 10 steps" and a "point in direction 90" would give back the script

So are wanting to translate text into blocks?

Or do you just want this? 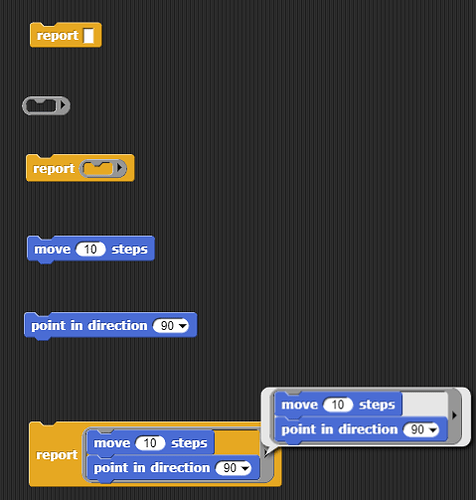 if you want to turn it into text, you can use syntax analysis, but if you just want to concatenate them use what @cymplecy said

that is no longer true. As of Snap v8 (to be released later this week) you can make blocks with blocks.

ah?
ill go to snap and look since i havent opened it in 4 months

it's in the dev version. Snap 8.0 hasn't been released yet.

Edit: it just got released

yes, but i would like to have a reporter do that and not have to do it manually

Is this the sort of thing your after?

It has now. I noticed the new blocks--they are cool. Now there's a "positon" reporter. Just an update.