This talk on the history of Smalltalk on Sept 1 may be of interest:

what does this have to do with snap?

It doesn't need to--this is #compsci.

Here's a link to a great video in which Jens and Brian describe connections between Lisp and SmallTalk that led to Snap! The description of the video states, "Snap! lead developers and designers Brian Harvey and Jens Moenig share the evolution of Snap! and their personal history with Snap!"

Here's the relevant slide from the video describing the family tree ... for Jens the path to Snap! was from SmallTalk to Scratch to BYOB to Snap! while for Brian the path was from LISP / Logo / etc. to Snap! (More of the details are provided in the video.) The connection between Snap! and SmallTalk is why the panel discussion at the Computer History Museum (streamed virtually) on the origins and history of SmallTalk might be of interest to some. 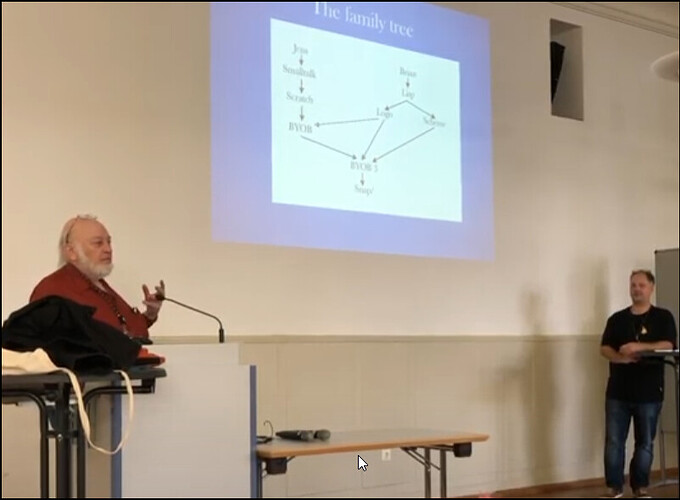 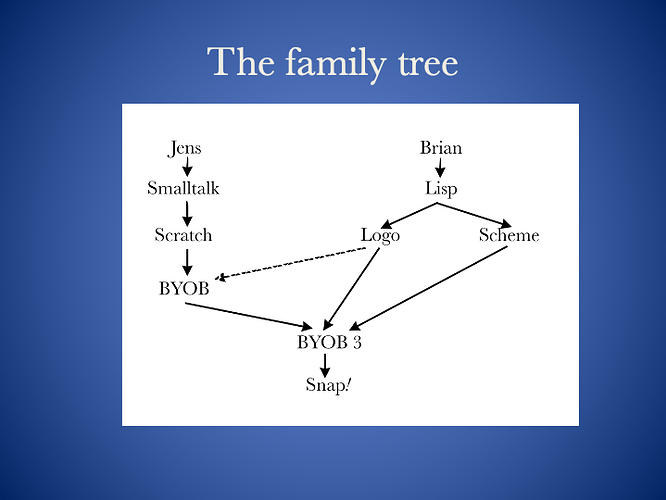 But the point is, Smalltalk is Jens's native language. (I wish I could say mine was Lisp, but alas it was actually Fortran.) So a talk about Smalltalk history is definitely relevant to Snap!! (And to Scratch, by the way, since Smalltalk is also John Maloney's native language. Just for example, that's why Scratch/Snap! blocks have title text in between input slots, not just a procedure name at the beginning like pretty much every other programming language.)

Also, my brother started learning HTML before other languages, would that be his native language?

would that be his native language?

Yeah, I'm afraid so. But let's not hijack the thread.