Problems: Health, Shooting, Reseting, Next Seen, Interactions, and maybe some other stuff. I want this game to be super good and super high quality so I need a lot of help, thanks!

Everyone who helps will be listed in the credits and depending on what they did they might have something special in game like a character with your logo or whatever.

Second, I recommend using an invisible sprite that goes to the player and then points toward the mouse pointer, then when the gun fires it points the bullet in the direction of the invis sprite

as for health do you mean player health or enemy health?

Kill script for German and damage:

great script comedy, but this script looks good, what about player health?

You know there's a less than or equals to block right?

Use less than or equal to

So I do it the other way around?

I helped you out by adding some code and adding in a less than or equal to block, score, slowing down the soldier, player health, and so on

I mean use this block

I just made my own instead

If you right-click an equals, less than or greater than block and select "relabel", a less than or equal to block will show up 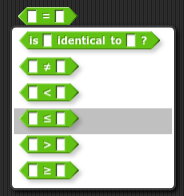 and now I have learned something, thanks

just remember to take the code from the project I posted:

I did, it really helped!