Has the blockify function been abandoned? 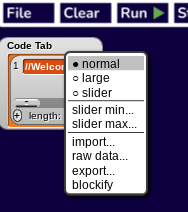 Sorry, it's because of the ring inside the list:

I think they are working on that.

They have said that it isn't a bug, it's intended, at least for now.

The picture at the top of this thread shows clicking on a variable watcher that contains a list. When doing that, which options you see depends on exactly where you click, inside or outside the orange border around the list picture.

You have to show the list to actually blockify it.

If you put a ring into a list, the option isin't present...

But isn't that the only way to put blocks into lists?

Yes, i think it's the only way

If you put a ring into a list, the option isin't present

Oh yeah huh. Now I remember, Jens did that because he (correctly) thinks that two ringed instances of a block aren't the same function, because they have different environments, therefore different local variables. But I would have allowed it anyway. :~)

So it isn't possible??

So it isn't possible??

If by "it" you mean blockifying a list containing blocks, right, it isn't.

So, in other words, it has been abandoned, but not removed.

I don't know what you mean by "abandoned." It still does exactly the same thing it ever did.

But what is true is that it's not as important as it used to be now that we have the ability to insert and delete slots in the middle of a variadic input.

ok...
what does that mean exactly?

At least one purpose of Blockify is to help in the situation in which you created a list, then you ran some code that modified the list, and now you want to recreate the list initialization code to create the new, modified value instead of the original value. Or you painstakingly typed in a 256-item list in a LIST block, except you left out number 137, so you put the list in a variable, opened a (list-mode) watcher for it, and used the editing features of the watcher to repair the list by adding the missing item, but now you have to recreate the LIST block with the fixed list.

But now you can directly edit the huge LIST block that you already have to open a new space where item 137 belongs.

now that we have the ability to insert and delete slots in the middle of a variadic input.

I don't know how I missed noticing that!

Should have been a full page announcement in The Times

and used the editing features of the watcher

By the way, why we can't edit in table view mode ?

Should have been a full page announcement in The Times