I made a Scratch 0.1 mod with first-class procedures, lists and continuations. I forgot about it for a while, but now I've fixed it up and released it on GitHub. 'GrumpyCat's the nickname because it's based on a grumpy old Scratch 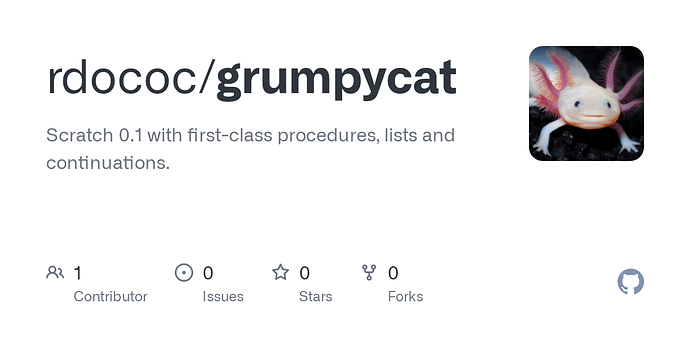 Interesting contrast between pre-release Scratch visuals and these powerful constructs.

Huh. I didn't realize that they actually implemented lambda before rejecting the idea. That shines some light on their refusal to add the BYOB features to Scratch ten years ago!

They really had first class continuations??? Can you show us?

Sorry, I should've been a bit more clear - this is a mod of Scratch 0.1 that I made a while ago and forgot about until recently.

Ah, I get it. So you basically made Snap!, it sounds like, and beat us to it? Or is it a recent mod of an ancient Scratch?

Ah, then thank you for the compliment of using our ideas.

You should look up call with current continuation in the Scheme manual for a discussion of all the ways it can go wrong! Some of them won't apply in Scratch, e.g., what happens if you have a file open and partly read, and then return to the place where you're just about to open the file. But some of them are just about the code itself rather than external issues like files.