What's the workaround custom-written block? I prefer that workaround to the block because of the project I'm working on might need me to take a specific point from that line of glide and move there instead. Or I might stop in the middle. Is there a glide towards?

EDIT: I missed the existing block in the pallette. But I still want a workaround so I can mid-stop it if I wanted to and customize it.

check out the "Animation" library for all kinds of acceleration and easing functions for various state-progressions, including gliding, turning, scaling and graphic effects. You can also build your own animations blocks using those techniques.

If not glide blocks

I'm confused. Don't we have GLIDE?

You can start from simple implementation. 60 steps usually takes 1s. 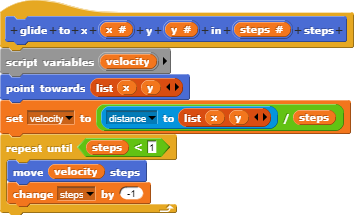 I can't use point. I'm making a platformer with a grappling hook.

Yes. I missed it. Check the OP. But I still want the custom workaround.

Well, first of all, you can pause the built-in glide using the yellow pause button in the top right corner. But you can certainly write your own, too.

When you say "I can't use point," why not? Is it that you don't want the costume to turn? You can control that with the three little buttons in a column next to the sprite picture above the scripting area. The bottom one of the three will prevent sprite rotation.

The alternative is to do basically the same thing in Cartesian coordinates, sort of like this:

OHHHHHHHHHHH...
You know I was going to make a new thread about Scratch having rotation features and Snap! not. But THAT'S how you do it. Thanks!
I think I will use Cartesian coordinates, because I need to be able to let go of the grappling hook mid-leap so I could drop back down. This makes it entirely possible. Thanks again!

THAT'S how you do it.

(Hover over "my" in the SET menu, then choose rotation style from the submenu.) 0 means no rotation, 2 means just left-right flip, and normal rotation is 1. You can find out the setting with

Thank you so much. I just came from Scratch and I still find it amazing to get quick answers from the developers themselves. I've never seen that on a platform before. This is the amazingness of Snap!'s small community.

"I don't get how you got that rotation style entry from the SET menu."

"I don't get what 'rotation style' means."

"I don't get whether I'm supposed to create a 'rotation style' variable first."

... many possibilities. What don't you get?

"I don't get what 'rotation style' means."

This one. And sorry for the confusion.

Ah. So the question is, when you give a sprite a TURN command, that affects what direction its next MOVE will move in. But what about the sprite's costume? There are three cases, chosen with these buttons:

The top button means that the costume turns with the sprite, so its nose (or whatever) is facing the exact direction in which it'll move. The middle button says that the costume will always be right side up, but can face to the left or to the right, the former for quadrants 2 and 3, and the latter for quadrants 1 and 4. And the bottom button means it never turns at all (always facing rightward, like the arrow on the button).

Those are the three rotation styles. They are, perhaps confusingly, numbered 1, 2, and 0 respectively. 2 and 0 make some sense: 2 means there are exactly two ways the costume can face, and 0 means no turning. But I have no good story to tell about 1.

(One might argue that if 2 means there are two possible costume orientations, then 1 should mean one possible orientation, i.e., the bottom button. And then 0 could mean that any orientation on a circle is okay. But this is a battle not worth fighting.)

I think 0 should be "all around" because it's basically a circle.
To avoid confusion, one can make the following block:

I think of it as 1 meaning "on" and 0 meaning "off", so it's kinda binary. 2 is the special case that's unexpected being able to mirror facing left and right. But it - also sorta - makes sense to name that state 2 because of the left/right alternatives.

But I have no good story to tell about 1

After logically explaining 0 and 2, 1 is the last 1 remaining.