The video about it:

This kind of goes in #compsci:math, but I'm also sharing a project I made.

I made a remix with randomization here.

Oh that's nice. I hadn't made the connection between nested rotating sprites and Fourier series. Been too long since I took complex analysis!

It's the "drawing with circles" part of the video. 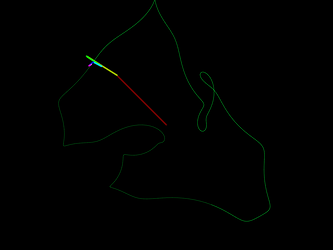 Yeah, I got that... It's just that we've done this sort of attached vector drawing in Logo since forever, and I knew about adding vectors turning in opposite directions to get an oscillating line segment, and separately I knew all about Fourier analysis, but somehow I didn't connect the two until watching the video.

Where there are two lines the same length, and the first one moves at a speed of 1 and the second a speed of -2?

Another one from the randomizer: 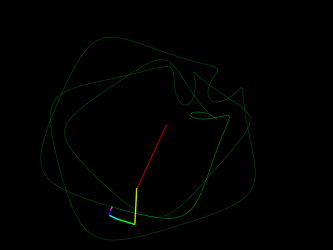 1 and -2 has that effect in my program, but in it, the sticks' speed is relative to the previous stick's speed. And, 1+ -2, or 1-2, = -1 as you said. (Except for the deviation caused by my yellow, green, cyan, blue, and magenta sticks' lengths adding up to slightly more than my red stick's length, thus making a very elongated ellipse.)

That's really cool. I actually saw the same video and made a similar project back in January. I really think its amazing how such simple mechanics can make such complex images.

I really think its amazing how such simple mechanics can make such complex images.

Yeah! Do you remember the part where it draws the Greek letter π?

Yes, very cool, but of course not as cool as the portrait of Fourier! 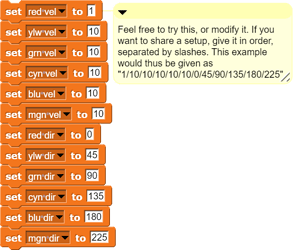 Have you experimented with having the program generate its own costumes and nest them, so you can have as many links as you want?

Some good initializations added to the randomized version.