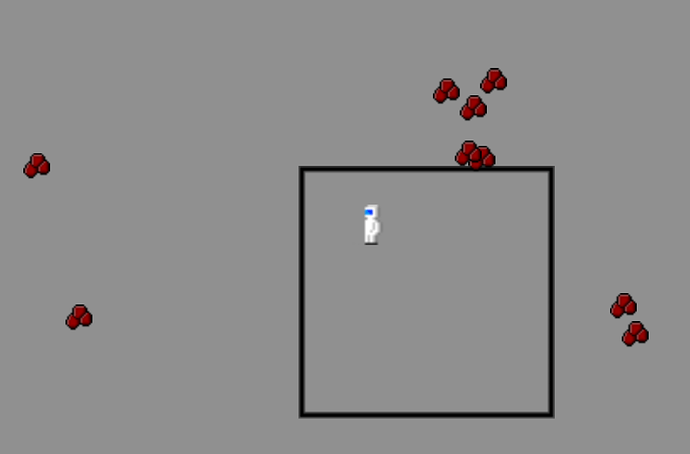 There is still many, I repeat, MANY things to complete. I'm no Texture artist, but all the textures were made by me! and I'm proud of them!

Many bugs still exists, such as bugs when the resources move, It is because the Player sprite is at 0,0 constantly, and the others move.

The box the player is surrounded by, is a test for collisions. I will replace it by a spaceship topdown view.

Also the gray background is a placeholder, I will Eventually replace it.

P.S. the resource currently at the game is called "Markiminium"!

I just realised that I picked the wrong name I had in Mind. It's now AstroMiner by d4s_over_dt4.

I thought that my awsome name failed...
Anyways,does that game have to do with astromining?
According to the same naming as unhexquadium you either get the name and resource to be unhexquadium(or unobtainium or smth) or you get to make the name markiminium
I would design a game which you have a limited fuel resource and you have to rendesvous and dock with asteroids to mine on them and get fuel(and air and water?)at the same time of avoiding retrograde orbit asteroids(they are the only type of booom boom im able to think of aside from drill overheating) and exhausting fuel when manuvering(yes this goes in term of manuever nodes and you should not wait years instead of time warping to manuver)
If you do not really want gravity then make it at a small domain and still restrict fuel(gravity does not make a visible difference on small domains,like if you teleport the iss to some satelite just above the karman line it would have a huge speed and crash,but if you teleport its top solar panel to its bottom one it would not make a difference aside from some rare problem of solar panel obstructions)

I think I am going to name a Element/Resource as Unhexquadium, as a thank you for the suggester of the game name (you), also you can give name for one more rare/fictional element.

And, I can't use AstroMiner as a Resource name, since it simply does not work.

PS: if you want, I can make textures for your space-themed game! this includes Resource, a Astronaut, etc.

And, I can't use AstroMiner as a Resource name, since it simply does not work.

Nope,im suggesting setting the game name instead of the resource name,since the reverse does not work

if you want, I can make textures for your space-themed game! this includes Resource, a Astronaut, etc.

currently none but maybe ill need some later

[scratchblocks]
say[I cheated by dragging the ores into my bag instead of walking towards them!]
[/scratchblocks]

also im thinking to make a website to host the changelogs, because snap's description editor is total torture.

do you have replit?
i can make you one
https://xdhetchd-astrominer-frontend.imcute-aaaa.repl.co

Nah, I'l make one. thanks tho.

heres the site (which is not registered yet): astrominer.rf.gd

Nice!(glad that youve picked my suggestion too,because replit is awesome)

I don't have time rn, plus the design is meant to be temporary until I get time to actually write CSS.

I'm gonna try to make an HTML version of this. Using Construct3.

until I get time to actually write CSS.

There is still many, I repeat, MANY things to complete. I'm no Texture artist, but all the textures were made by me! and I'm proud of them!

i can help you :D

me too, but I don't want to write it now, especially now that I'm actually starting to make this game, a game.

I really need a scroller background, because for now its a Solid Gray background and I want something that is pleasing but also look like its from the moon or Kuiper belt objects.

Also it needs to scroll according to where the player is going.